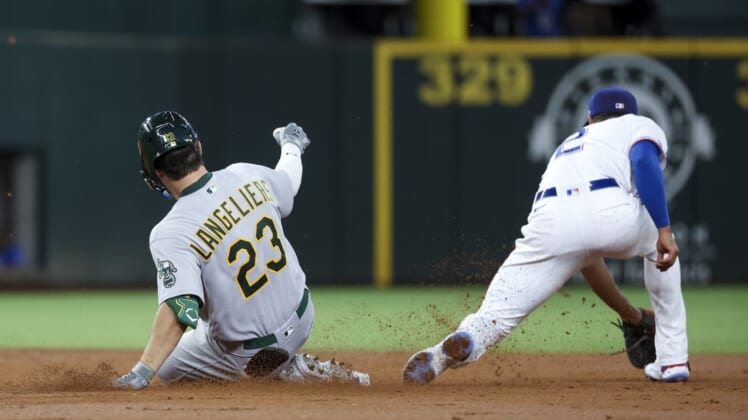 Elvis Andrus blasted a two-run homer to help the Oakland Athletics end a nine-game losing streak with a 5-1 win against the Texas Rangers on Tuesday night in Arlington, Texas.

Sean Murphy singled, homered and scored twice and Vimael Machin also had two hits for Oakland, which avoided its second 10-game losing streak of the season.

Nathaniel Lowe collected three hits and Jonah Heim and Leody Taveras had two hits each for the Rangers, who were trying to win four straight.

Cal Stevenson doubled to lead off the game for the A’s and scored on a one-out single by Seth Brown for a 1-0 edge.

Shea Langeliers made his major league debut as the designated hitter for Oakland and doubled on the first pitch he saw to start the second.

Langeliers, ranked as the A’s No. 1 prospect by MLB Pipeline, moved to third on a groundout and scored on a single to right by rookie first baseman Jonah Bride for a 2-0 lead.

The A’s jumped on the first pitch for the second straight inning when Murphy went deep over the center field fence in the third for a 3-0 lead.

Heim doubled off the wall in the left field corner with two outs in the fourth, but Lowe was thrown out at the plate while trying to score from first.

Sears walked the bases loaded with one out in the fifth, but escaped the inning when Marcus Semien flew out to Brown in foul territory in right field and Taveras was caught in a rundown between third and home.

A.J. Puk relieved Sears to start the sixth and gave up three straight singles with one out to make it 3-1.

Andrus gave the A’s some breathing room against his former team when he hit a two-run homer in the seventh to stretch the lead to 5-1.

Domingo Acevedo, Kirby Snead and Dany Jimenez each threw shutout innings in relief for the A’s.