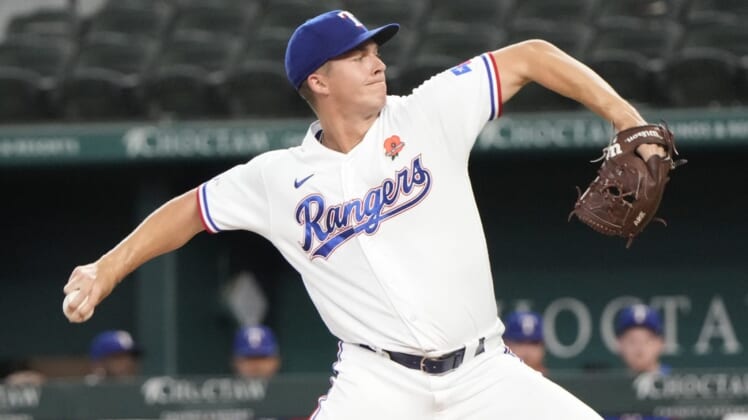 Texas Rangers center fielder Eli White showed off his leaping ability and power on Monday night in a 9-5 win over the visiting Tampa Bay Rays.

White scaled the wall to rob Ji-Man Choi of a three-run home run in the first inning. At the plate in the second inning, White connected on a two-run home run.

Tampa Bay’s Wander Franco had three hits, but in the ninth inning was lifted for a pinch-runner after pulling up rounding first on a single.

Glenn Otto (3-2) gave up two runs, with one earned, and struck out four with three walks in six innings.

Rays right-hander Drew Rasmussen (5-2) labored through a 37-pitch first-inning, and was lifted after three innings, giving up a season-high five runs.

White’s sensational grab in the first inning was a momentum-changing play. Choi crushed a towering drive to center that White timed perfectly and pulled into play for an out. Instead of being behind by three in the first inning, the Rangers responded with two runs in their half of the first.

Rasmussen walked the bases loaded and Calhoun opened the scoring with his two-run single through a vacated shortstop.

The Rays trimmed their deficit to 2-1 in the second inning. Taylor Walls walked and scored on Vidal Brujan’s sacrifice fly.

In the second inning, Smith singled in his first MLB at-bat. He scored on White’s second homer.

The Rays closed it to three runs at 5-2 on Franco’s run-scoring single in the fifth inning.

The Rangers added on with a four-run sixth inning. Smith and White each singled. Marcus Semien added an infield single, and Smith scored on reliever Ryan Thompson’s fielding error. Mitch Garver laced a two-run double to left, and Calhoun doubled home Garver for his third RBI of the night.

Tampa Bay rallied for three runs in the seventh off Matt Moore. Kevin Kiermaier, Franco and Randy Arozarena each had RBI singles.