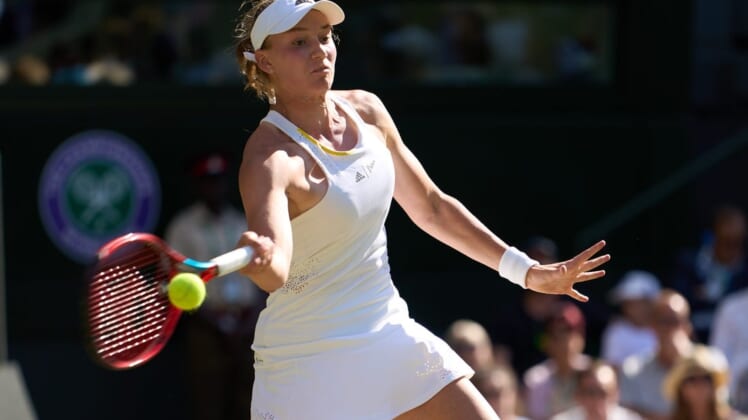 Elena Rybakina dropped the first set but roared back to defeat No. 3 seed Ons Jabeur and win the women’s singles title at Wimbledon on Saturday.

Rybakina, the No. 17 seed who was born in Moscow but has represented Kazakhstan since 2018, triumphed 3-6, 6-2, 6-2 over the Tunisian at the All England Club in London.

Saturday’s match marked the first time that both women in the finals were playing their maiden matches in a Grand Slam singles final.

Jabeur, who entered as the heavy favorite, jumped out to a 2-1 lead when she broke Rybakina’s serve early in the first set. With Rybakina serving to stay in the match at 3-5, Jabeur steamrolled her, denying Rybakina a point.

But the second set was a different story.

After winning points on just 53 percent of her first serves in the first set, Rybakina changed her strategy, serving primarily to Jabeur’s backhand. It paid off as she won 73 percent of the first points on her serve and hit 13 winners to seven unforced errors.

And as frustration set in for Jabeur in the second set, so did the miscues. Her percentage of points won on first serve dropped from 80 percent in the first set to 59 percent and her serve was broken twice by Rybakina, who saved all four of her break points. Jabuer had seven winners against nine unforced errors.

Jabeur dropped serve in the first game of the third set but had a chance to turn the momentum. With the 23-year-old Rybakina serving up 3-2, Jabeur quickly put her down 0-40 and had a triple break point to tie the match.

But Rybakina fought back, winning five straight points to take a commanding 4-2 lead and then the title.

In her on-court interview, Rybakina said her goal was to last until the second week of Wimbledon. Her win shocked even her.

“I’m gonna be honest. In second week of Grand Slam at Wimbledon to be a winner, I mean it’s just amazing,” she said, adding she didn’t have any more words to describe her win.

Jabeur, 27, was the first Arab woman and the first woman from Africa to play for a Grand Slam title.

“I love this tournament so much and I feel really sad, but I mean it’s tennis,” she said shortly after receiving her runner-up trophy from Kate Middleton, the Duchess of Cambridge. “There is only one winner. … I’m trying to inspire, you know, many generations from my country. I hope they’re listening.”