Elena Rybakina gets past Victoria Azarenka at Indian Wells 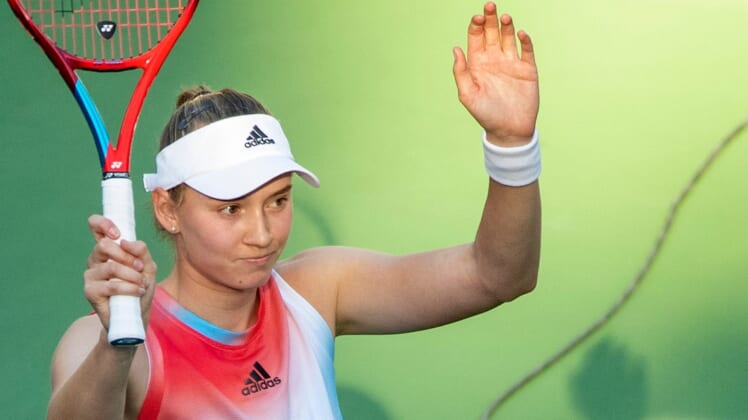 Victoria Azarenka, a two-time winner of the BNP Paribas Open, was knocked out of the Indian Wells, Calif., event in the third round on Monday.

On Monday, Rybakina staved off the only break point she faced and won an impressive 17 of 26 second-serve points.

“I was focusing a lot of on my serve, of course,” Rybakina said postmatch. “I served big and it’s my weapon, and today it worked out really well for me. She’s a great champion, and I was just happy to play against her today.”

Rybakina said of opposing Golubic, “For sure, tough match. I have to focus on my serve because it’s really a big weapon for me. Be physically ready, be patient. Here, the conditions are slow. Rallies might be longer than you expect, so just be patient and try to fight and focus for every point.”

In another match that came down to a third-set tiebreaker, 30th-seeded Marketa Vondrousova of the Czech Republic rallied past Estonia’s Anett Kontaveit 3-6, 7-5, 7-6 (5).

The final set began with five consecutive service breaks, and Vondrousova eventually pulled even at 4-4 with another break. Vondrousova jumped out to a 5-2 lead in the decisive tiebreaker before sealing the victory on her fourth match point.

Her next opponent will be 21st-seeded Veronika Kudermetova. The Russian advanced when the Czech Republic’s Marie Bouzkova retired because of a right ankle injury while ahead 2-0 in the second set after losing the first set 6-4.

“It’s never easy against Petra,” Sakkari said of her win. “One of the great champions of the game, a very good friend of mine. I have a lot of respect for her and admire her for what she has achieved. A lot of people would be jealous of her career.”