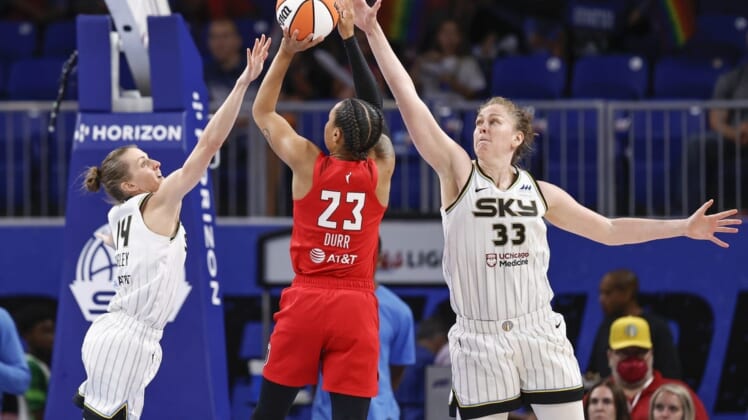 Elena Delle Donne scored a season-high 26 points and collected eight rebounds to lead the Washington Mystics to an 85-66 victory over the Atlanta Dream on Wednesday night at College Park, Ga.

Myisha Hines-Allen scored 14 points and Natasha Cloud added 13 as Washington (14-10) completed a four-game season sweep of the Dream. Shatori Walker-Kimbrough tallied 12 points and Ariel Atkins had 10 as the Mystics beat Atlanta for the 12th time in the past 13 meetings.

The Mystics shot 49.2 percent from the field, including 7 of 20 from 3-point range. Delle Donne made 10 of 17 shots while registering her fourth 20-point effort of the campaign.

Atlanta connected on 41.9 percent of its shots and missed all 12 attempts from behind the arc. Howard was 0 of 6 from long range.

Parker scored the first basket of the fourth quarter to pull Atlanta within 58-56, but Washington answered with a 27-10 game-ending run.

The Mystics scored nine straight points and Delle Donne capped the surge with a turnaround jumper to make it 67-56 with 6:21 left in the contest.

Parker’s basket brought the Dream within seven with 4:15 left. However, Hines-Allen scored a basket and Delle Donne swished an off-balance trey to beat the shot clock to give Washington a 74-62 edge with 2:33 remaining.

Delle Donne had 13 first-half points as the Mystics held a 41-36 lead at the break.

The Dream were ahead 32-27 after two free throws by Parker with 5:10 left in the second quarter. Washington finished the half with a 14-4 push — including the last nine — to hold the five-point advantage.

Atlanta moved within 53-52 on Billings’ steal and layup with 2:56 left in the third quarter. But Hines-Allen’s basket with 11.6 seconds to go gave the Mystics a 58-54 lead entering the final stanza.