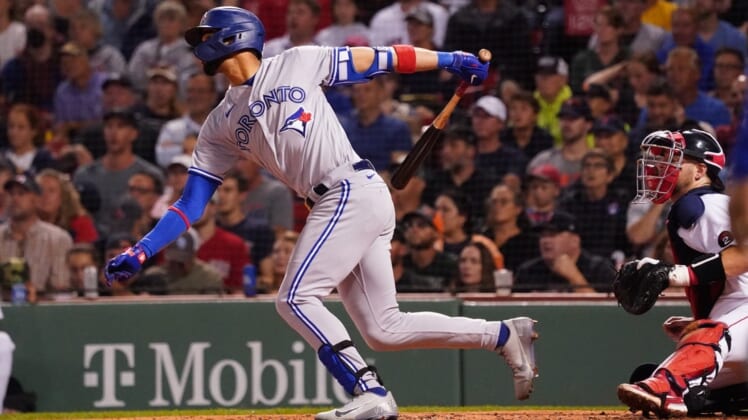 An eight-run third inning provided more than enough offense for the Toronto Blue Jays as they defeated the host Boston Red Sox 9-3 on Tuesday to begin a three-game series.

Eight straight Toronto batters reached base with two outs in the third, capped by a three-run triple from George Springer. Blue Jays center fielder Jackie Bradley Jr. went 2-for-3 with an RBI and two runs in his first-ever appearance against his longtime club.

Vladimir Guerrero Jr. hit two doubles for the Blue Jays, who won for the fifth time in six games. Matt Chapman went 2-for-4 with a triple, a run and an RBI. Bo Bichette was 2-for-5 with two runs, Springer also had two hits, and Cavan Biggio drove in two.

Rafael Devers went 3-for-4 with a ninth-inning RBI single and Kevin Plawecki was 2-for-3 with a run for the Red Sox, who have lost back-to-back games and four of five.

Josh Winckowski (5-7) worked a career-low 2 2/3 innings and was charged with six runs for a second straight start. He yielded six hits and two walks, and he struck out two.

Boston left fielder Tommy Pham and shortstop Xander Bogaerts both left the game early with back spasms. Pham was hurt after crashing into the Green Monster while attempting to catch Bradley’s leadoff double in the third.

Back-to-back hits to begin the second allowed the Red Sox to jump ahead. After Christian Arroyo ripped a double off the center field wall, Enrique Hernandez drove him home on a rolling single through the middle.

After Bichette singled, Chapman’s bases-loaded walk made it 3-1 and ended Winckowski’s outing. Austin Davis entered in relief, and Biggio immediately lined a two-run single to center.

The Jays didn’t score again until the seventh, when Bradley’s one-out single to center plated Bichette.

The hosts got a run back in the bottom of the seventh with help from a Toronto error, cutting the deficit to 8-2, but the bases were left loaded when J.D. Martinez flied out to end the inning.