Eight NFL teams with best chance to build a dynasty

As we prepare to watch the Cleveland Cavaliers and Golden State Warriors once again square off in the NBA Finals, the idea of sports dynasties springs to mind.

The NFL has obviously boasted its own dominating franchises over the course of time. Obviously, the New England Patriots fall into this category right now. Quarterback Tom Brady and head coach Bill Belichick share 15 seasons of playoff history and five championships together.

But, news flash: This won’t last forever. New franchises within the league are gaining momentum and are poised for some tremendous success down the road.

Here are eight teams that have the best chance of building dynasties of their own.

The Rams have constructed a crew that is going to be tough to conquer in the NFC. From the youngest head coach in the NFL to a roster loaded with talent on both sides of the ball, this franchise is trending up in a spectacular way. Quarterback Jared Goff is proving to be worth the first overall pick the team used in 2016 to take him. He helped the Rams become the highest-scoring franchise last season. His wide receiving group offers tons of upside and shares the field with last season’s Offensive Player of the Year. We are talking about the young Todd Gurley, who recorded a league-high 2,093 scrimmage yards, topped off with 19 touchdowns.

On defense, the Rams are equally as impressive. A couple of bold trades scored the Rams one of the best cornerback back duos in the league, featuring Marcus Peters and Aqib Talib. The team also improved its front seven by adding defensive tackle Ndamukong Suh to join Aaron Donald and Co.

This team should be in full overdrive mode by the time it settles into its new stadium in 2020.

When all components of this team are healthy, the Texans should not be underestimated as they pave their path for success for years to come. A defense showcasing defensive end, J.J. Watt, linebackers Whitney Mercilus and Jadeveon Clowney, and new safety Tyrann Mathieu will cause opposing offenses to punch the panic button.

On offense, the Texans earned an A+ grade when they drafted quarterback Deshaun Watson 12th overall in 2017. He is on course to return healthy, and at only 22 years old, the league is his to take by storm. Watson will look to build on his rookie campaign and his record-breaking 19 passing touchdowns, which he accomplished in only seven games. Surely, wide receiver DeAndre Hopkins will continue to help his quarterback out in this department. He scored a league-leading 13 touchdowns in 2017.

This is an up-and-coming Texans franchise that is heading into dynasty mode. 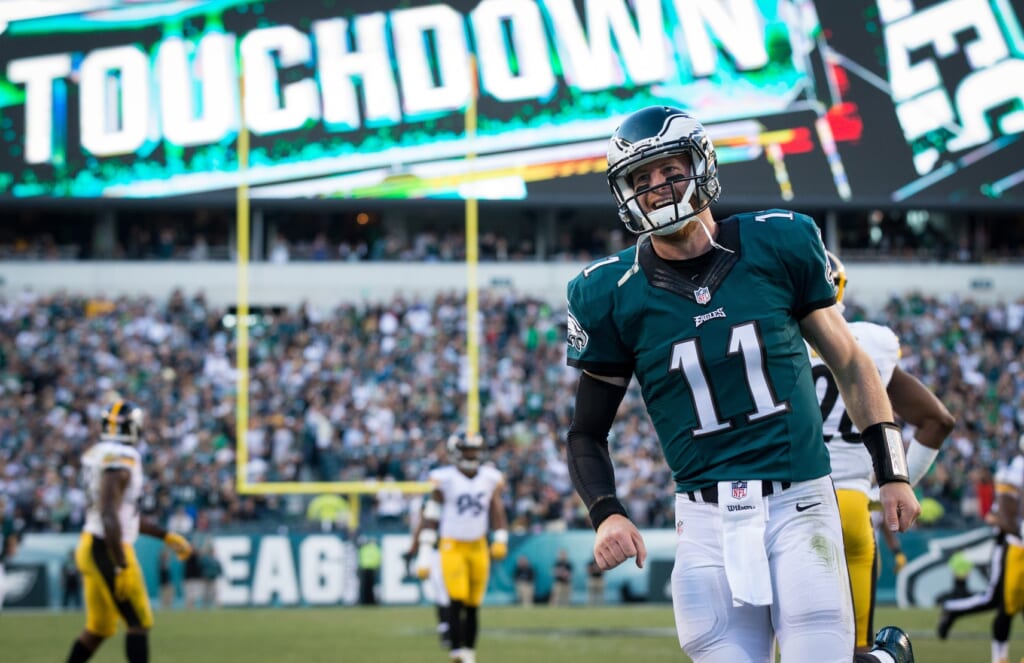 Of course the winner of Super Bowl LII makes our list. The Eagles are stacked in every department, and the rest of the NFC East should be jealous. It was meant to be that quarterback Carson Wentz was thrust into the starting job his rookie year. He has only continued to improve, passing for 33 touchdowns compared to only seven picks in 11 games prior to tearing his ACL last season. And, what team wins a Super Bowl with a backup quarterback under center? A sound offensive line in addition to a solid rushing game and talented receiver corps helped accomplish this task.

On defense, this is a unit that outfoxed the GOAT in the ultimate championship battle. This game-stopping group consists of stars such as defensive tackle Fletcher Cox, defensive end Brandon Graham and safety Malcolm Jenkins.

There should not be much that slows down this gang — expertly coached by Doug Pederson — for years to come.

Talk about an AFC team that will give its competition fits for the foreseeable future. The Chiefs are entering a new era as the young Patrick Mahomes, at the age of only 22, takes over. Mahomes, who passed for an NCAA-high 5,052 yards in 2016, inherits some amazing playmakers. Wide receivers Tyreek Hill and Sammy Watkins, who both averaged over 15 yards per catch last season, are perfect fits for Mahomes and his strong arm. On the ground, second-year running back Kareem Hunt should continue to exhaust his defenders. He averaged a stout 4.9 yards per carry in his rookie debut. We also must mention tight end Travis Kelce, who is a red-zone beast.

On the other side of the field, the Chiefs made some key offseason moves to stack their defense. They added nose tackle Xavier Williams and linebacker Anthony Hitchens. They also spent five draft picks on some defensive rookie reinforcements.

This group might easily be the franchise to beat in the AFC West starting this fall.

If quarterback Jimmy Garoppolo plays anything like the small sample size we saw last year, the 49ers are in excellent shape. Garoppolo managed a perfect five-game record and completed an impressive 67.4 percent of his passes after taking over as the team’s starter in Week 12. He is surrounded by plenty of receiving talent, including some second-year guys in that of Trent Taylor and George Kittle, who should only continue to flourish in the years to come. A youthful running back committee headlined by Jerick McKinnon will keep the offense balanced.

Defensively, the 49ers drafted a small army of rookies to stockpile for future success. On top of this, 49ers fans are embracing cornerback Richard Sherman’s next NFL adventure in the Bay Area.

So far, the 49ers organization deserves major kudos for giving Kyle Shanahan a chance to remold a team that was a major dumpster fire three seasons ago. 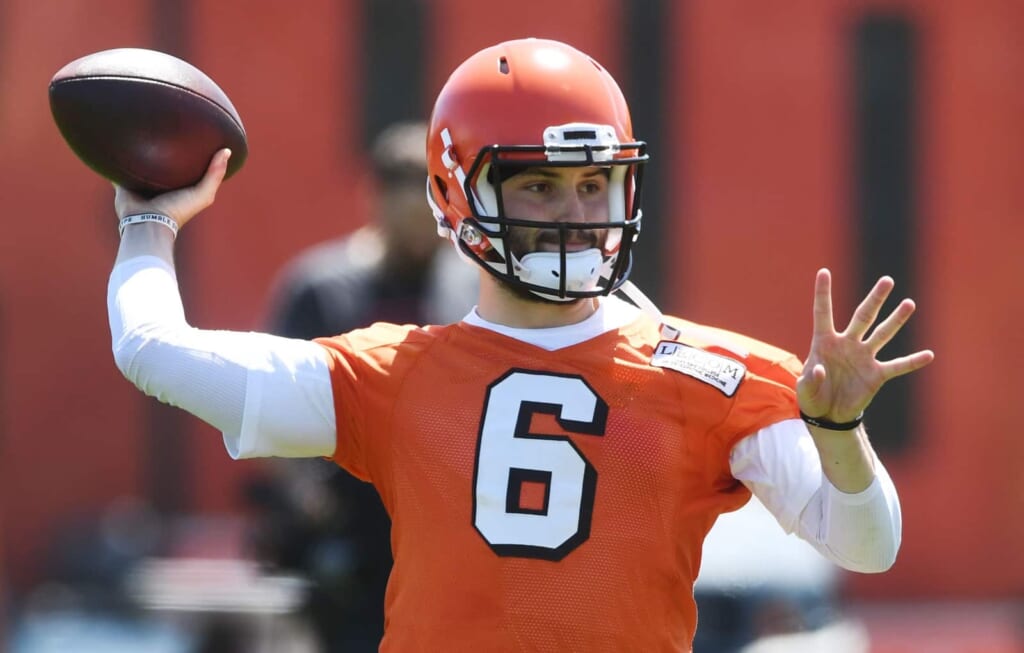 Speaking of disasters, this might be the season the Browns start getting some things right. Cleveland is staged for future success if everything goes according to plan. The Browns drafted the quarterback they felt was best-suited to become the face of the franchise. Baker Mayfield has the talent and capabilities to eventually fill the role. In the meantime, quarterback Tyrod Taylor is a suitable starter. He is significantly better than any of the quarterbacks that have been under center in Cleveland over the last several years. Wide receiver Jarvis Landry teaming up with Josh Gordon is something even non-Browns fans can’t wait to see. There is also everything to love about Carlos Hyde headlining a cast of running backs that includes Georgia’s Nick Chubb and Duke Johnson.

When it boils down to the Browns defense, they scored receiving cornerback Damarious Randall in a trade with the Green Bay Packers. They also did well drafting corner Denzel Ward in the first round. Plus, last year’s No. 1 overall pick, pass-rusher, Myles Garrett, will only get better.

If the Browns cannot start gaining a leg up in the AFC North, they might as well throw in the towel for good.

Switching gears to the NFC North, the Vikings are poised for brilliant success. They sport a defense that was downright scary after it gave up only 15.8 points on average per game last year. A major win this offseason was the team adding defensive tackle Sheldon Richardson to the mix. The Vikings also increased their depth at cornerback by drafting Central Florida’s Mike Hughes in the first round.

On offense, all the chips were moved to the center of the table when the Vikings inked a deal with the most desirable free agent in the league. Quarterback Kirk Cousins has many seasons of play left in him at the mere age of 29. He will benefit from some Vikings playmakers who rate much higher in our book than his former Washington Redskins teammates did. Vikings fans should be very excited watching Cousins in action with receivers Stefon Diggs and Adam Thielen. Second-year running back Dalvin Cook returning is the icing the cake.

This franchise possesses all the components to begin a dynastic run.

After a tremendous season that last saw the Jags record 65 total points against the Pittsburgh Steelers and New England Patriots, anything is possible moving forward. The Jaguars should not be underestimated after producing a 10-6 playoff record. Quarterback Blake Bortles should continue to improve after last completing his best percentage of passes to date. Continuing to have running back Leonard Fournette behind him will only help.

Meanwhile, the Jaguars’ defense is top shelf and runs like a well-oiled machine. It challenged any team it met last year and ceded only 16.8 points per contest. Opposing quarterbacks took hits left and right against this fierce unit, which registered 55 sacks in 2017. Not much should change with this situation any time soon. At the same time, young defensive backs A.J. Bouye and Jalen Ramsey will continue to be nightmares in coverage.

Look for the Jaguars to continue keep trending up in the AFC for the foreseeable future.