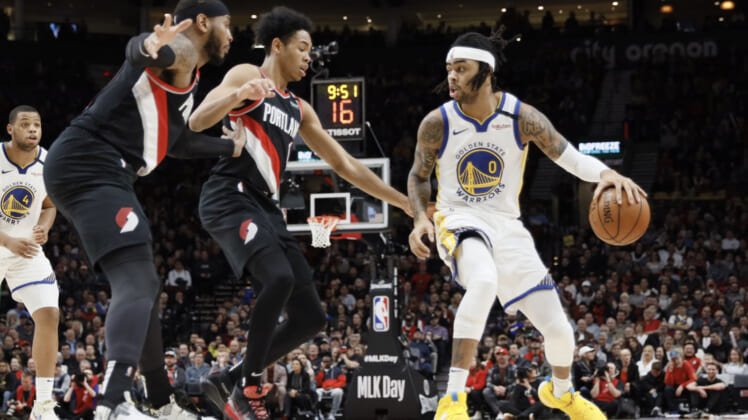 As the NBA continues to the second half of its season, all but six teams are within five games of a playoff spot. That’s primarily because both conferences are top heavy at this point in the campaign.

This would normally suggest a rather quiet trade deadline. That’s not going to be the case. Multiple bottom-end teams are looking to sell off assets as a way to prepare for the offseason. That includes both the Golden State Warriors and Atlanta Hawks.

On the other side of the ledger, the competition we’ve seen atop the NBA standings should lead to an active trade deadline in that regard. The Los Angeles Lakers, Miami Heat and Philadelphia 76ers are all looking to add reinforcements.

It’s in this that we give you the eight teams we expect to be the most active ahead of the Feb. 6 deadline.

At this point, it’s all about strategy for the league-worst 10-36 Warriors. Stephen Curry and Klay Thompson remain sideliend to injury. Nothing else has gone right for the five-time defending Western Conference champs. It’s now all about preparing for the offseason.

This will more than likely include Golden State attempting to get something for impressive veterans Glenn Robinson III and Alec Burks. Even if it is a young player and a couple second-round picks, that makes sense. Less likely, the Dubs could potentially look to move All-Star point guard D’Angelo Russell as a way to set up a potential summer blockbuster to add to the Curry/Thompson core.

The status quo obviously isn’t working for a Rockets team that sits at just 27-16 on the season. After acquiring Russell Westbrook to reunite with fellow former MVP James Harden, the expectation in Houston was that this team would be closer to the Lakers atop the Western Conference. Alas, that has not been the case.

Look for the always aggressive Daryl Morey to attempt a blockbuster ahead of the February trade deadline. Houston has the pieces in that of Clint Capela, P.J. Tucker and Eric Gordon to potentially get something done. Cavaliers All-Star big man Kevin Love is a name to watch.

What a tremendous job front office head Pat Riley did with the Heat this past summer. Adding rookies Tyler Herro and the undrafted Kendrick Nunn has been absolutely huge. In fact, Nunn is second in scoring behind the recently-acquired Jimmy Butler on Miami’s roster.

At 31-13, it’s time for the Heat to add another top-end player to the roster. They have been mentioned as a landing spot for Jrue Holiday, among others. It might take moving Herro and a couple draft picks, but a game-changing trade could be in the cards here soon. Maybe Chris Paul becomes an enticing option once again.

It’s been noted that Dallas is looking for a big man to team up with Kristaps Porzingis. Someone who could extend to the perimeter as a way to team up with MVP candidate Luka Doncic. That’s now magnified after starting center Dwight Powell suffered a ruptured Achilles.

Dallas sits at 28-16 on the season, but is just 12-10 in its past 22 games. Porzingis continues to struggle with his shot. Boasting two expiring deals in that of Tim Hardaway Jr. and Courtney Lee, the Mavs have financial pieces to pull off a big trade. Add in the ability to send out multiple first-round picks, and that’s magnified further. Again, someone like Kevin Love could be an option here.

Sixers head coach Brett Brown has made it clear that his team needs to be more aggressive and effective from beyond the three-point line. It’s been an Achilles heel for a Sixers team that’s currently the sixth seed in the Eastern Conference and is under .500 since Christmas Day.

The expectation here is that general manager Elton Brand will get something done. Philly has been linked to two perimeter scorers from the Detroit Pistons. However, I’m envisioning a more notable trade that could include the Sixers giving up talented rookie guard Matisse Thybulle as well as a first-round pick. There’s some notable players on the trade block that could help this team, including Danilo Gallinari.

Ugly. That’s the best way to describe what we’ve seen from Portland after a run to the Western Conference Finals last season. The Blazers currently sit at 19-27 and as the 10th seed. Given how top-heavy the conference is, a run to the postseason could still be in the cards. If not, Portland might want to consider blowing it up by firing general manager Neil Olshey and breaking up the Damian Lillard-C.J. McCollum backcourt.

First things first. Portland has a valuable trade asset in that of the expiring contract of Hassan Whiteside. It also has Trevor Ariza to entice teams after he was acquired in the Kent Bazemore trade. It could lead to one last-ditch effort from Olshey to get this right before he’s run out of the Pacific Northwest.

We’ve already seen Hawks general manager Travis Schlenk pull off one trade in bringing back Jeff Teague to be Trae Young’s backup. The expectation here is that Atlanta will continue to look for reinforcements to build around the talented Young after a disastrous 11-34 start to the season.

This could potentially include breaking up the Hawks’ young core by moving John Collins and/or Cam Reddish. The status quo obviously isn’t working. And while Schlenk is looking to build this in the model of his former Warriors team, the growth isn’t there. Expect a major trade in Hotlanta ahead of the February deadline.

Surprisingly, Los Angeles now seemingly has the assets to pull off a notable trade. Given the team’s lack of assets from both a salary cap and draft pick aspect, that’s a shocking development. It also includes potentially moving star third-year forward Kyle Kuzma in an attempt to get a third “star” to team up with Anthony Davis and LeBron James.

Reports suggest that the 36-9 Lakers are looking for an upgrade from Rajon Rondo at point guard. They’ve already been linked to resurgent former NBA MVP Derrick Rose. Look for the Lakers to make a notable trade before all is said and done. There’s no reason for this team not to go for the jugular in a Western Conference that’s ripe for the picking.