Now that the NBA season has hit its second half and the trade deadline is mere weeks away, rumors of deals are starting to heat up around the water cooler.

Some teams such as the Los Angeles Lakers will look to be active as a way to sell off contracts for a run in free agency this summer. Meanwhile, the likes of the San Antonio Spurs and Cleveland Cavaliers will likely have to make moves in order to be considered serious championship contenders.

It’s in this that we look at eight potential trades that could have wide-ranging ramifications as the season draws to a conclusion and the playoffs start.

The Spurs’ point guard position has been in flux for the better part of the past calendar year. Youngster Dejounte Murray, veteran Tony Parker and the recently re-signed Patty Mills are sharing duties this season. Out of that group, only Parker is shooting better than 42 percent from the field. The 35-year-old guard is coming off a serious injury and is averaging just north of 20 minutes per game.

As we saw in the Western Conference Finals against Golden State last season, the point guard position was a real detriment to San Antonio. That simply can’t be the case this year if San Antonio wants to knock off the three-time defending conference champions.

Why not bring back a familiar face in Hill, who is on the chopping block in Sacramento? The veteran is averaging north of 10 points per game while shooting at a tremendous 46 percent mark from the field. It just makes too much sense not to happen.

DeAndre Jordan to the Milwaukee Bucks 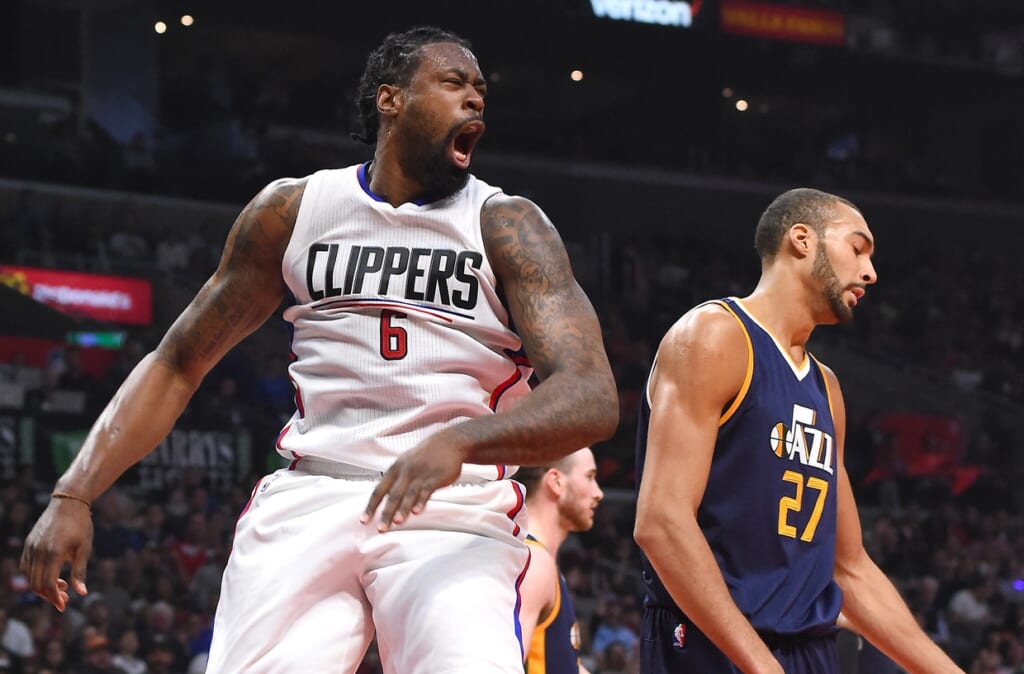 Jordan’s name continues to be bandied about in trade talks. The latest rumor suggests that he wants to end up with the Houston Rockets. But based on the recent history between the Rockets and Clippers, that’s a highly unlikely scenario.

Instead, we focus on Milwaukee attempting to take advantage of Cleveland’s struggles back east to make a major play for the conference title. Having already added Eric Bledsoe to the mix, it makes a ton of sense for the Bucks to go all in here, even if Jordan is slated to become a free agent.

The idea of teaming Jordan up with Giannis Antetokounmpo might be too much for the Bucks’ brass to pass up on. His defensive presence in the paint with Giannis’ length out on the wing would be a potentially nuclear dynamic for Milwaukee. The team could offer up a combination of Mirza Teletovic, Thon Maker and/or John Henson to make this work for Los Angeles.

Kent Bazemore to the Cleveland Cavaliers

People might very well be focusing on a splashy trade for the suddenly struggling Cavaliers. And make no mistake about it, they will pull one off before the deadline. But this squad does not need another star to team up with LeBron James, Kevin Love and Isaiah Thomas. Instead, it needs players to fit a specific role.

That’s where Bazemore and the Atlanta Hawks come into play. They’re looking to sell big time before the deadline, and Bazemore seems to be the best fit for Cleveland. He’s a stout wing defender, something the Cavaliers need big time. Add in a 39 percent mark from distance this season, and he fits Cleveland’s perimeter shooting mold.

This deal also wouldn’t cost Cleveland Brooklyn’s first-round pick it acquired from Boston in the Kyrie Irving trade. That’s big with the team potentially having to look at a rebuild should James move on in free agency this summer.

Kemba Walker to the Denver Nuggets 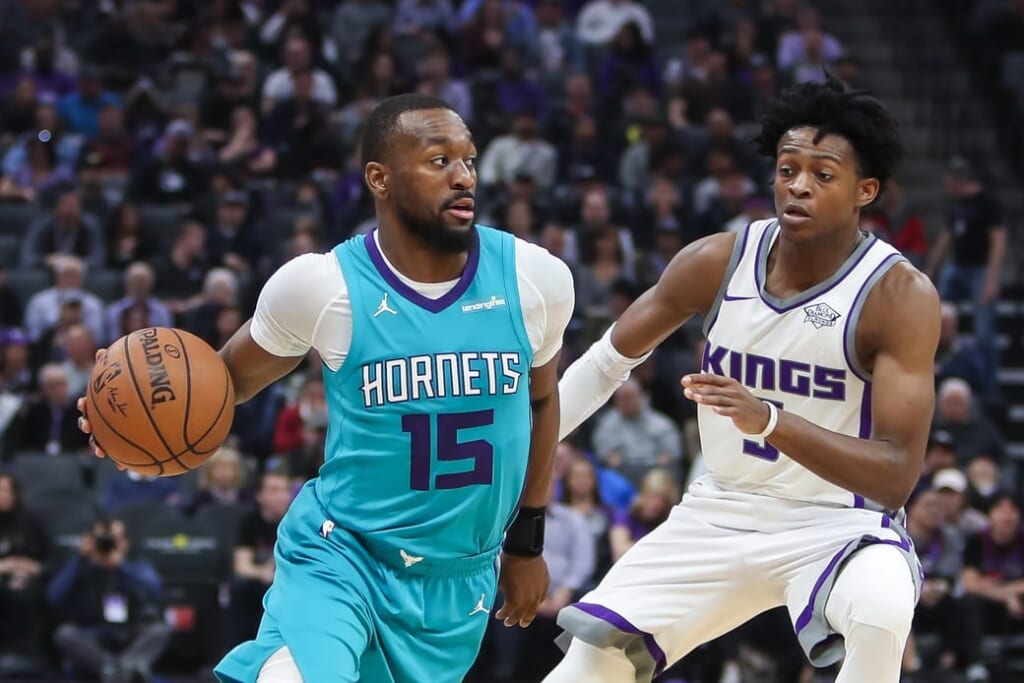 This would be a rare in-season blockbuster. But it seems to make all the sense in the world. The Charlotte Hornets find themselves at 17-25 on the season and are going nowhere fast with Walker as the face of the franchise. Things needs to be blown up, and blown up fast. That’s where this potential trade comes together.

Denver has continually been mentioned as a possibility to acquire a disgruntled star. And the young team has necessary assets to make a trade of this ilk work. It would be all about the up-and-coming squad and GM Artūras Karnišovas being willing to part with Jamal Murray. We’re not too sure that’s a reasonable expectation.

What we do know is that the Nuggets would make a major jump out west if they added a consistent 20-plus point scorer to go with Garry Harris, Nikola Jokic and Paul Millsap. It’s something for the team to really think about.

DeMarcus Cousins to the Boston Celtics

The New Orleans Pelicans currently find themselves as the sixth seed with a 22-20 record out west. It’s this type of mediocrity that has defined the team for some time now. The thought process behind adding Cousins to the mix at last season’s trade deadline was to build a bully up front with Anthony Davis. And thus far, it just hasn’t worked out.

With Cousins set to become a free agent this summer, the Pelicans might very well find themselves in a position in which they have to acquire something for his services.

Sure the Celtics gave up major assets to acquire Kyrie Irving during the summer. But there’s still a lot that GM Danny Ainge has at his disposal here. Would sending Jaylen Brown or Jayson Tatum to New Orleans for a rental in Cousins make any sense? No. If they can get a long-term commitment from the big, that might change.

Either way, look for Ainge to kick the tires on a potential huge acquisition before the trade deadline. The picking is ripe for a conference title with Cleveland struggling and an unproven Raptors squad acting as the only real major threat back east. Why not go all in for a title this season? After all, the team already made its intentions clear by trading for Irving and signing Gordon Hayward prior to the season.

Lou Williams to the Philadelphia 76ers 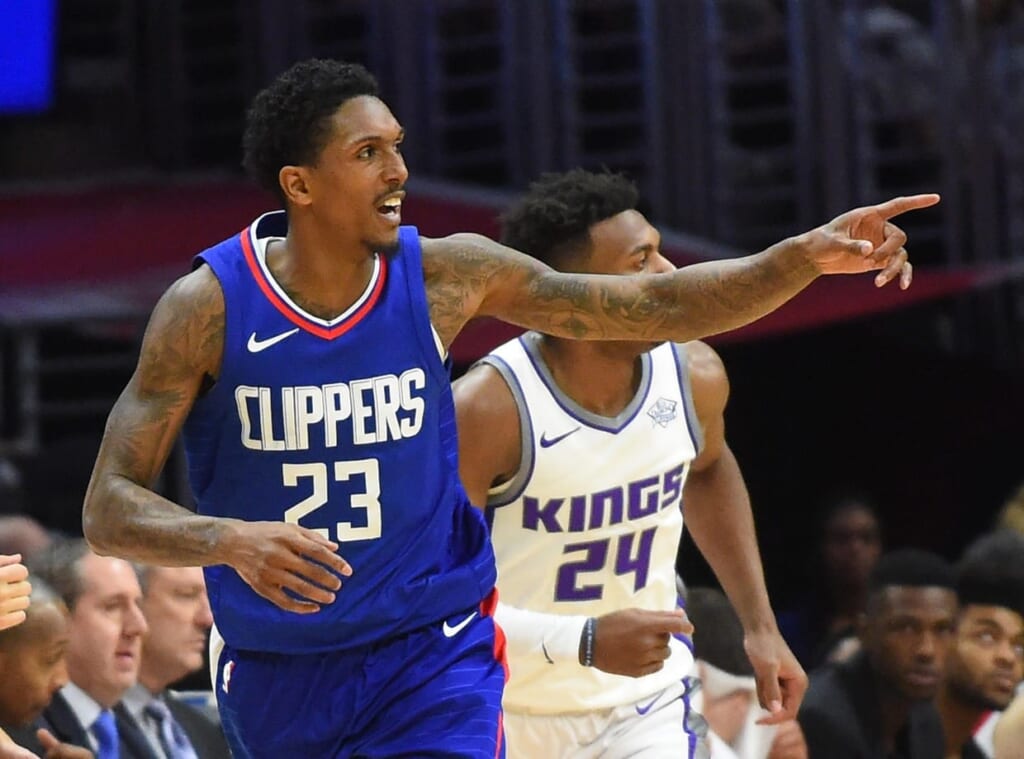 Let’s go back to where it all started. In the midst of a career season that’s seeing him average 23.3 points for the Los Angeles Clippers, Williams could be a valuable asset for the team should it decide to sell prior to the trade deadline. And set to become a free agent following the season, Williams’ long-term future in Los Angeles remains up in the air.

Despite boasting a ton of young talent in Joel Embiid and Ben Simmons, the Sixers find themselves on the playoff fringe back east. Adding someone of Williams’ ilk and outside shooting ability would surely help JJ Redick in the perimeter game. And it would make this a much more well-rounded team. Given that Williams started his career in Philly, this makes even more sense.

Julius Randle to the Utah Jazz

This wouldn’t necessarily be an earth-shattering trade for the 2017-18 season, but it would have wide-ranging ramifications heading into the summer. The Lakers have already set themselves up well to chase top-end free agents. Now, if the team can somehow find a way to move the contract of Luol Deng, that would be taken to a whole new level.

This is where the Utah Jazz come into play. Having lost Gordon Hayward in free agency, Utah finds itself nine games under .500. Its plan from here on out is a long-term rebuild. Taking on Deng’s deal wouldn’t be a detriment to this rebuild.

Adding an asset such as Julius Randle to team up with Rudy Gobert and Donovan Mitchelll would be a nice starting-off point. Utah could the expiring contracts of Derrick Favors and Joe Johnson to make this work. In return, the Lakers would be set up nice to chase LeBron James and Paul George in July.

Paul George to the Toronto Raptors 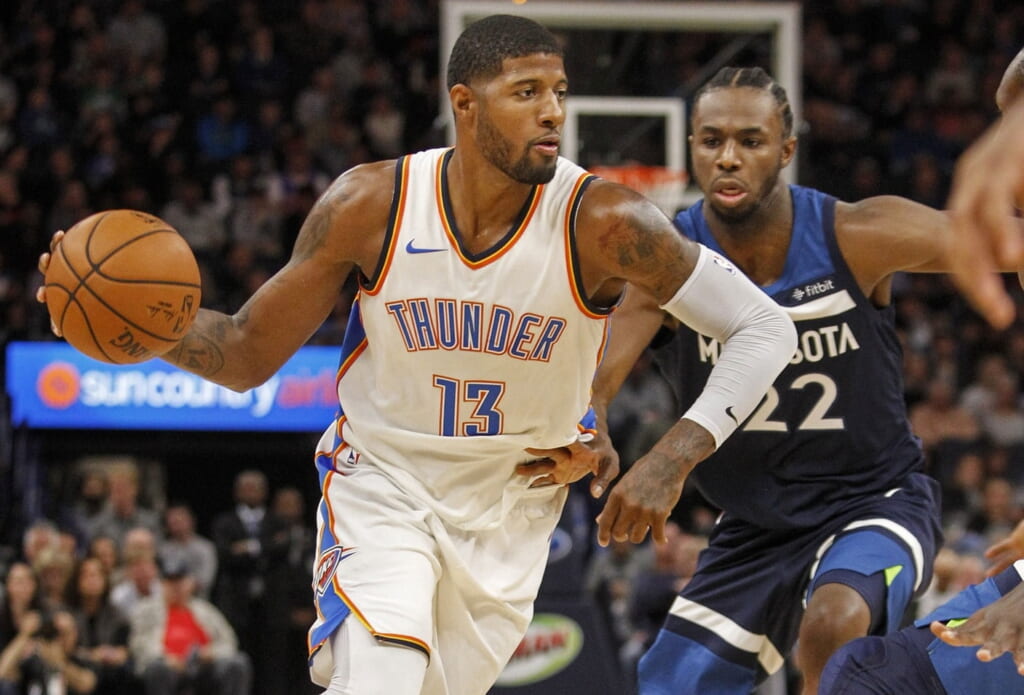 Sure the Oklahoma City Thunder find themselves currently as a top-five seed out west. That’s fine. The issue here is that George and Carmelo Anthony have not fit in swimmingly with Russell Westbrook in OKC. It could happen as the second half of the season continues. But do we see this team being anywhere near a title contender in the Western Conference? It sure doesn’t have that look right now.

With George set to become a free agent and rumors continuing to swirl that he’ll sign with the Los Angeles Lakers, maybe OKC looks to the future and adds a couple assets for him before he leaves for free.

That’s where an impressive Raptors team comes into play. Cleveland and Boston have been the talk of the Eastern Conference. Meanwhile, Toronto is flying in under the radar at 29-13 and with the second-best record in the conference. Given that OKC would be selling off George for pennies on the dollar, Toronto wouldn’t have to mortgage too much of its future for what would ultimately be a rental.