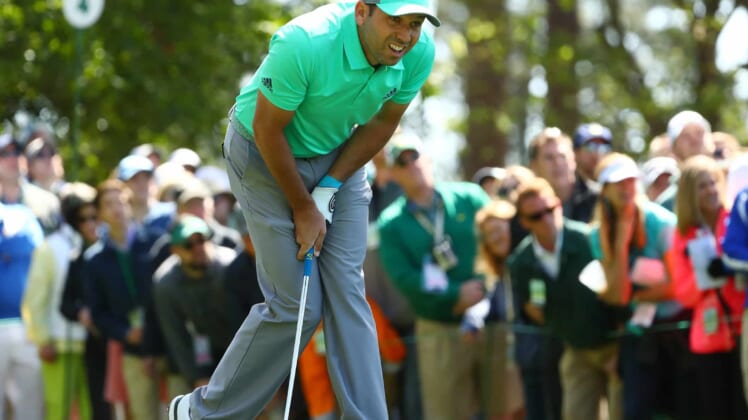 For anyone who might have missed it, Sergio Garcia produced his own “Tin Cup” moment during the opening round of the 2018 Masters. It made history for all of the wrong reasons and effectively ended any hopes of a repeat. It was a truly cringe-worthy moment to see.

But it was not the first of its kind at the Masters. In fact, Sergio joined some pretty exclusive company with the difficult-to-watch moment. He joined another past Masters champion and some of the best golfers of their respective eras.

We can practically write a book detailing all of Greg Norman’s Augusta heartbreak. Still, one moment, specifically one round, really stands out. Rory McIlroy is one Masters away from a career grand slam. But were it not for a cringe-worthy moment seven years ago, he’d already have his Green Jacket.

The Masters has given us some truly cringe-worthy moments over the years. These are the most notable among them.

We start with our most recent entry on the list. It was certainly something to see.

The last time Sergio had played this hole prior to 2018’s opening round, he eagled it en route to his first major victory. Things didn’t go quite so well this time.

Garcia started the 15th well enough, hitting the fairway off of the tee. Then, going for the green, he put his second shot in the water. That was just the first of five consecutive shots that got wet. Garcia’s approach shots from the drop area continually spun back into the water.

It was “Tin Cup” come to life, only without so much of the passion that Roy McAvoy gave us. Garcia ended up with a 13, ted for the worst score on a hole in the history of the Masters. It was also the primary contributor to an opening round 81, the worst opening round score of any defending champion.

We knew that Garcia repeating in 2018 was going to be hard. There’s a reason it’s only happened three times in Masters history. But to see any realistic chance come to such a sudden end so early in the tournament definitely sent chills up the spine, and not in a good way.

Spieth looked like a lock for his second straight Green Jacket in 2016. He teed off on the 10th hole with a five-shot lead. By the time the 12th hole was completed, he was down by four shots. A seven on the par-three 12th hole (featuring two balls in the water) was the main culprit. Normally, that sequence — specifically that hole — would be our focus here. But Spieth’s status as the defending champion gave us something else to cringe at even harder.

Since Spieth had won in 2015, it was his responsibility to place the Green Jacket on the shoulders of Danny Willett. Normally that’s not such a big deal, as defending champs don’t usually choke the Masters away. But Spieth did. By the time the outdoor ceremony got underway, Spieth’s facial expressions had changed somewhat.

This was brutal. Norman had endured his share of heartbreak at Augusta in the past, most notably in 1986 and 1987. But entering the final round of the 1996 Masters with a six-shot lead, it looked like Norman would finally break through.

He surrendered much of that lead over the opening nine, but was still up by two teeing off on 10. By the time Norman and Nick Faldo finished the 12th hole, the two-shot lead had shifted to Faldo. It only got worse from there.

In truth, Faldo probably doesn’t get enough credit for playing so well. He fired a 67 in the final round, applying pressure to Norman from the first hole on. Still, if Norman had even matched third place finisher Phil Mickelson’s final round 72, he would have held off Faldo’s charge.

It’s hard to compare this collapse to what happened 20 years later with Spieth. Spieth’s collapse was shocking not only because of how sudden it was, but because of what he had already done on that course. Norman had the previous nightmares at Augusta so in the back of your mind, you knew the possibility was there. Still, it was tough seeing it unfold over an entire round.

This was shocking and cringe-worthy on a different level than anything else we’ve seen on this list.

Since it’s 50 years old, it’s worth going over the story again. De Vicenzo shot a final round 65, which would have placed him in a playoff with Bob Goalby. Unfortunately, he carded a final round 66. That was a problem.

Tommy Aaron — De Vicenzo’s playing partner — marked him for a par four on the 17th hole instead of the birdie three that De Vicenzo had actually scored. When it came time to sign the card, neither man noticed the mistake. If De Vicenzo had signed for a lower score on any hole, he would have been disqualified. The punishment for signing for a higher score isn’t as severe, but it does force the golfer to take the higher score. That put him one back of Goalby.

In 1968, there was more of a need for scorecards than today. Still, the punishment was Draconian. Yes, either Aaron or De Vicenzo could and should have noticed the mistake. De Vicenzo even acknowledged his guilt, saying “what a stupid I am.” Still, this felt like a man voluntarily returning something to a store that he had inadvertently stolen when it fell to the bottom of his shopping cart, only to be prosecuted to the full extent of the law.

The punishment didn’t quite fit the crime. All these years later, it’s still tough to think about.

Looking back on it, the 2003 Masters was something of a strange tournament. Mike Weir won the event in a playoff despite making bogey on the playoff hole. But Len Mattice’s double-bogey in sudden death doesn’t make our list. The final round struggles of Maggert, the of 54-hole leader, get our attention.

It started on the third hole. Maggert drilled his shot into the lip of the fairway bunker. That would have been bad enough, but the ball hit Maggert, prompting a two-shot penalty and leading to a triple-bogey on the hole.

After scrapping back into the mix, Maggert’s hopes for a Green Jacket were officially squashed on the 12th hole. There, he put two balls in the water en route to a quintuple bogey. It was a truly strange round in that Maggert made no bogeys or doubles, yet still blew a 54-hole lead. Those were his only two blemishes. If he had simply made bogey on those two holes, Maggert would have won the tournament outright by one shot.

The 2003 Masters was a fun tournament in some respects and an awfully hard tournament to watch in others. Maggert’s final round falls into the latter category.

While we’ll always remember Spieth’s collapse at the 2016 Masters, another happened during the first round. In fact, this one happened on the first hole. Els six-putted the first hole, with most of the putts coming within a few feet.

For all intents and purposes, Els’ tournament was over right there. It was especially tough to watch, as Els has a similar track record at Augusta to the aforementioned Norman. He’s contended several times but has never quite pulled a win off.

We obviously can’t say that Els would have contended again had he simply two-putted. Way too much golf was left to be played.

Still, it was rough seeing such a well respected veteran shoot himself out of contention in a tournament that was only one hole old.

This was similar to Spieth’s collapse in 2016 in that it unfolded over the same holes. He held the lead heading into the second nine, but things changed dramatically after a triple on 10 and a four-putt double on 12.

But strangely enough, it was his tee shot on a hole that he’d eventually par that was hardest to watch. Trying to get back in the tournament, McIlroy’s tee shot on the par-five 13th went hard left and into the water. He quickly buried his head into his arm. Those watching at home could literally see the moment where he realized his chances to win were gone.

It’s also important to remember who McIlroy was at that point. He was not a longshot by any means, but he also wasn’t the superstar golfer that we know today either. He had never won a major. McIlroy had some good rounds in them, but had never sealed the deal. And yes, he bounced back well, lapping the field at the 2011 U.S. Open. But nobody knew that would happen at the time.

It was awfully tough watching a 21-year-old kid going through all that.

It’s awfully hard to imagine anyone coming closer to winning a Masters without actually putting the Green Jacket on. Guys like McIlroy, Spieth, and Norman blew big leads, but they had a lot of golf to play. De Vicenzo was done in by a technicality. But even if everything had gone right, he only would have been in a playoff — and a full 18-hole playoff at that. Who’s to say that he would have won?

But here’s something we can say for absolute certain. If Hoch had made a two-foot putt on the first hole of a sudden death playoff against Faldo in 1989, he would have won the Masters. No more shots would have been played.

It did not happen. In fact, his putt barely even caught the lip. The comeback putt that Hoch made to force a second playoff hole was significantly longer than the one he missed.

Much like he did seven years later with Norman, Faldo punished his opponent’s mistake. He birdied the 11th hole — the same hole he bogeyed in all four regulation rounds — to win the first of his three Green Jackets.

While most golfers can relate to missing a short putt, seeing what happened to Hoch was awfully tough to watch.