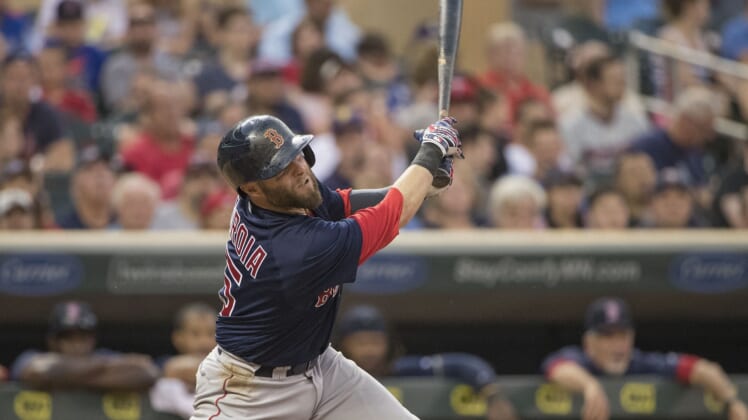 We’re only days away from knowing who will start the MLB All-Star Game this summer. Shortly thereafter, we’ll know who the reserves are. That knowledge will also tell us who 2016’s MLB All-Star snubs are.

What players in the midst of great seasons are most at risk of watching the 2016 Midsummer Classic from their homes?

The Astros shortstop is having a fine season, slashing at .262/.360/.452 with 11 homers and eight stolen bases. In a normal season, that would be good enough to make the team at the normally thin offensive position of shortstop.

This isn’t a normal year.

Correa has a few problems holding him up.

One, while Houston has come back well, it had a dismal start to the season. Young players from bad teams generally stay off of the radar of the voters. Additionally, Xander Bogaerts is having a monster year for the Red Sox. When a player on a big market team is having a big season, it makes it hard for anyone else at that position. In this case, it’s justified. Bogaerts should start.

Two, the shortstop position is deeper than normal. Assuming Bogaerts gets the start, Correa is still in competition with Eduardo Nunez, Francisco Lindor, and possibly Elvis Andrus for what will likely be two spots.

Three, it’s close, but Lindor is having a slightly better season. Nunez is also having a great season, and realistically, the Minnesota Twins don’t have many other potential All-Stars.

On offense alone, the Astros have both Jose Altuve and George Springer. Altuve will likely be the starter at second, while Springer is a strong candidate for the outfield. It may not be entirely fair, but Correa gets the short end of the stick.

We stay at shortstop but go to the other league.

Unfortunately for Crawford, he’s fighting the same uphill battle that Correa is dealing with in the American League. The competition would be hard enough if it was only Crawford, Trevor Story, Corey Seager, and Zack Cozart battling for three spots.

The problem is magnified by the stranglehold that the Chicago Cubs have on the voting, which has Addison Russell in place to start. Russell isn’t having a bad year, but he’s not on par with any of those four guys.

Crawford is also done in by playing for a good team. It’s likely that least three of Buster Posey, Brandon Belt, Madison Bumgarner, and Johnny Cueto will be in San Diego. Other than Russell and maybe Seager, the other candidates don’t have as many All-Star-worthy teammates.

Crawford is having a good year but is also a pretty natural snub.

With seven home runs and a .309/.369/.458 slash line, Dustin Pedroia is having a renaissance season. Unfortunately, he’s having it in the wrong year.

Second base is loaded in the American League. The position is so deep that players having great years like Jonathan Schoop, Rougned Odor, and Jason Kipnis will probably not get much consideration.

Jose Altuve is on track for a well-deserved start. Pedroia is having a nice year, but even his overall numbers don’t stack up to either Robinson Cano or Ian Kinsler. If the Red Sox needed the spot, Pedroia could possibly get the nod. Fortunately for Boston, it has plenty of All-Star options, as four Red Sox players are on track to start in San Diego.

Pedroia will likely have to wait until 2017 to make his fifth All-Star team.

The third base position is very top heavy in the National League. Kris Bryant will start the game. For Lamb to make the team, he’d likely need to beat either Nolan Arenado (NL-leading 21 homers, 61 RBI) or Matt Carpenter (11 homers .296/.416/.558). Good luck.

The other problem is that the Diamondbacks are simply not having a good season. They have qualified All-Star candidates in both Paul Goldschmidt and Jean Segura. It’s also conceivable that Zack Greinke could even get selected. Despite those options, Arizona is only 35-40. Realistically, that kind of team shouldn’t have more than maybe two All-Stars.

But depth at the position is a familiar issue for infielders. If we continue the idea that no more than three third basemen will be selected, we need to figure out who Seager would replace.

It won’t be Manny Machado, who has a comfortable lead in voting. It won’t likely be Josh Donaldson. The All-Star Game tends to benefit big name guys and Donaldson is the reigning American League MVP. Plus, the Toronto Blue Jays’ star has comparable power stats to Seager and is slashing at a vastly superior .279/.391/.565.

The deck is certainly stacked against Seager.

Tyler Chatwood's road ERA today spiked after giving up 3 runs in 1 2/3 injured innnings — to 1.25. Still the best in baseball.

While that would normally be enough to reward Chatwood with a trip to San Diego, finding a spot for him this year is nearly impossible. That 3.15 ERA is good enough for only 19th among qualified National League pitchers. The Senior Circuit has 15 pitchers with an ERA under 3.00. Five of those guys are under 2.10.

Projecting pitchers is difficult at times. Managers will usually take a bunch of them and guys who start the Sunday before the All-Star Game are generally replaced. That leaves a slight opening for Chatwood, but the depth of this position in the National League is just overwhelming.

V-Mart has really lived up to the name of his position. The Detroit designated hitter has been raking the ball all season, to the tune of .327/.374/.524 and 12 homers.

First Tiger to homer from both sides of the plate in a game since 2009? #VoteVMart: https://t.co/JrsIBfbC4e https://t.co/gPVznAjj2w

So, what’s the issue?

The main one is that there’s really no need to have more than two DH’s on an All-Star roster. Even if the game runs long, DH’s don’t do anything besides hit, so there’s no need to sub them out a lot. Plus, if more than two are needed, a manager can always use a position player.

David Ortiz is starting as the American League DH. One can bet on the game being something of a tribute to him, not dissimilar to what Derek Jeter got in 2014. It would be rather surprising to see Ortiz get fewer than three at-bats. With that in mind, we’re likely to see Martinez, Edwin Encarnacion, and Nelson Cruz battling for one spot.

Martinez is having a great season in the wrong year. It’s a common theme.

There’s no doubt that Hector Rondon has been one of baseball’s best closers this year. The Cubs’ stopper has 12 saves, a 1.48 ERA, 0.66 WHIP and has 12.2 strikeouts per nine innings.

Unfortunately, his chances are hurt by a couple things.

One, given the number of excellent starting pitchers in the National League this year, Terry Collins might be more likely to take a few more of them in spots that normally go to relievers.

The bigger concern is the team that Rondon plays on. Chicago currently has five position players slated to start. On top of that, it would be rather conservative to guess that two Cubs’ starting pitchers will also make the trip to San Diego.

Chicago is definitely having a great year and they deserve plenty of All-Stars, but they can’t get many more than that.

We have to remember that every team needs an All-Star and the Cubs are not the only National League team with several worthy players. So, in a strange twist, Rondon’s All-Star hopes are being hurt by the same great voting that’s helping so many of his teammates.