With NFL training camps less than a month away, the 2015 season is starting to take shape. For the most part, rosters are set around the league. Stars are prepared to pick up where they left off last season, while others attempt to rebound from some recent struggles.

There is no other position in the NFL more interesting than running back heading into the 2015 season. While the NFL has started to trend away from placing a great deal of importance on this position, there are still a select few who can change the game on a consistent basis.

From a top-end running back in the Pacific Northwest to a battering ram in cheese country, here are the eight-best running backs in the NFL heading into training camp later this month.

What Lynch has done for Seattle on a consistent basis over the past several years has to be recognized. Since his first full season with the team back in 2011, the enigmatic running back is averaging 1,612 total yards and over 12 touchdowns per year.

We look at Lynch as a powerful between-the-tackles runner, but there is so much more he brings to the table. He’s put up well over 1,000 receiving yards during the past four years, and is one of the most-willing blockers from his position in the NFL. According to Pro Football Focus (subscription required), Lynch was the eighth-best blocking running back in the NFL in 2014. That just goes to show us the full arsenal of weaponry he brings to the mix on a weekly basis.

Consider this: Lynch put up either 100-plus yards or a touchdown in seven of Seattle’s final eight regular season games last year. It’s this type of production that doesn’t just make Lynch one of the most-valuable players in the NFL, it makes him the best all-around running back.

Peterson may have missed 15 games last season due to a well-documented child abuse case. On the field, all this means is that the best running back since Emmitt Smith graced the field for the Dallas Cowboys is fresh and ready to go in 2015. There’s nothing else we should take into account when it comes to Peterson’s ability to perform at a high level on the field, at least when it comes to addressing that situation. And on the field, he’s been one of the most-dominating running backs in league history.

After coming back from a torn ACL towards the latter part of the 2011 campaign, Peterson tallied a near-record 2,097 rushing yards the following season. He followed that up with over 1,400 total yards and 11 scores in 2013. Overall, the future Hall of Fame running back was averaging nearly 1,700 total yards and 13 touchdowns per season heading into the 2014 campaign. Those averages also came over the course of a seven-year span.

Despite not being much of a receiving threat and finding himself in the middle of the pack when it comes to pass protection, Peterson’s domination on the ground sets himself apart from the rest of the group below. A lost season doesn’t change that one bit.

To put into perspective what Le’Veon Bell did last season, his 2,215 total yards represented a Steelers’ franchise record—a franchise that has seen the likes of Franco Harris, Barry Foster and Jerome Bettis run the ball before him. He did this in his second season in the NFL.

In addition to averaging 4.6 yards per attempt and putting up over 1,300 rushing yards, Bell finished the season with 83 receptions while averaging over 10 yards per catch. That’s absolutely ridiculous from the running back position. Oh, and Bell caught 79 percent of the passes thrown in his direction.

Despite being suspended for the first three games of the season, this former second-round pick definitely deserves to be right atop the list of best running backs in the NFL. That’s not even debatable at this point. 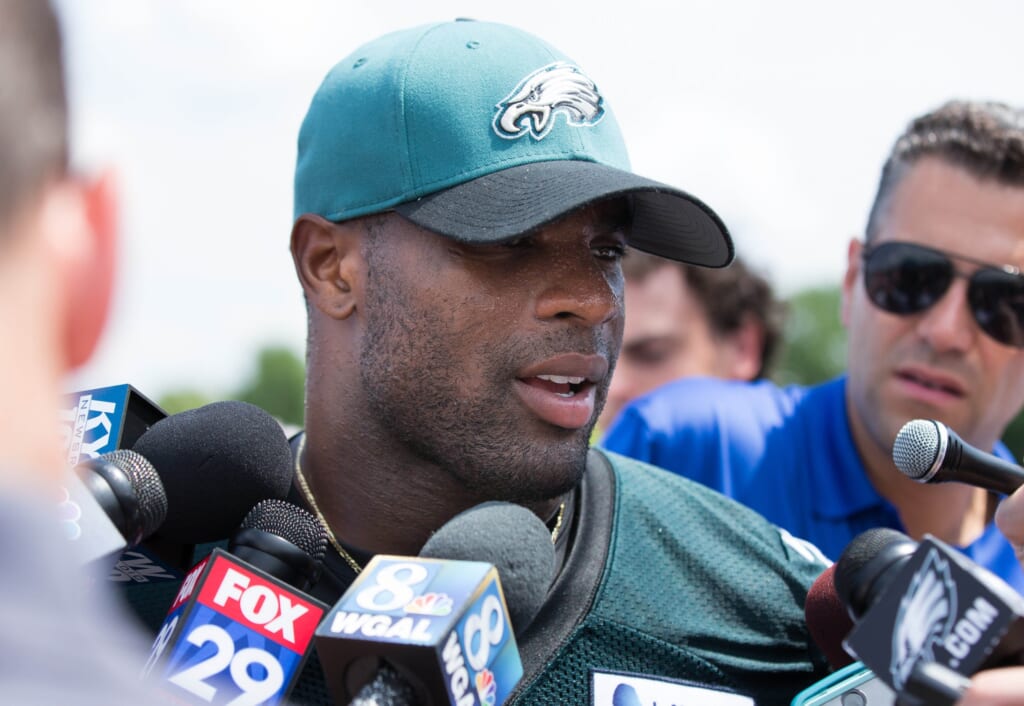 Courtesy of USA Today Sports: Now with Philadelphia, Murray finds himself in another good position.

Some are going to argue that Murray was more of a product of the Dallas Cowboys elite offensive line than anything else last year. While basically true on the surface, it’s important to note just what type of situation he’s heading into with the Eagles. Those same skeptics don’t realize that Philadelphia actually boasted the best run-blocking offensive line in the NFL last season (via Pro Football Focus, subscription required).

More than that, did anyone question Emmitt Smith’s abilities when he was putting up huge numbers for the Cowboys behind the likes of Larry Allen and Nate Newton some two decades ago? A running back can’t control how good his offensive line is. He can, however, help control how he performs on the field. And that’s why Murray belongs on this list.

Now in Philadelphia, Murray will have an opportunity to run behind a great run-blocking offensive line in a scheme under Chip Kelly that should use his talents to the best of its ability. While 2,200-plus total yards seems far-fetched, I wouldn’t be surprised to see him hit the 2,000-yard plateau.

What makes Forte’s 2014 performance so compelling is the fact that he also tallied over 1,000 yards against defenses that were hellbent on stacking the run against him. Naysayers will point to his 3.9 yards per rush average, but that’s the primary reason right there. In reality, Forte was running against loaded boxes a majority of the time.

Over the course of his seven-year career, Forte is averaging 1,633 total yards and about eight touchdowns per season. Those numbers are comparable to what Lynch has done since joining Seattle. Just think about that for a second before calling us out on having him so high.

The first draft that I remember paying attention to in great detail was back in 2008 when Charles went to the Chiefs in the third round. I remember thinking specifically that this skinny 5-foot-11 kid from Texas wasn’t going to have much of a career ahead of himself. It’s instances like this that most of us who cover the draft are happy to be wrong.

Eight years later, and Charles is one of the most productive running backs in the NFL. He’s put up over 5,000 total yards and 39 touchdowns over the past three seasons, earning Pro Bowl honors all three campaigns. The smallish running back has also tallied 1,300-plus total yards in his last five full seasons in the NFL.

It’s this type of consistent production that has turned skeptics like myself into fans. It’s also this type of production that has to be considered shocking based on the fact that Kansas City is one of the worst teams in the NFL as it relates to getting the ball down the field. Last year alone, Alex Smith completed just 14 of his 35 passes (31 percent) that traveled 20-plus yards down the field. Without any type of vertical passing threat, Charles was still able to average five yards per rush. That tells us what we need to know about him heading into the 2015 season. 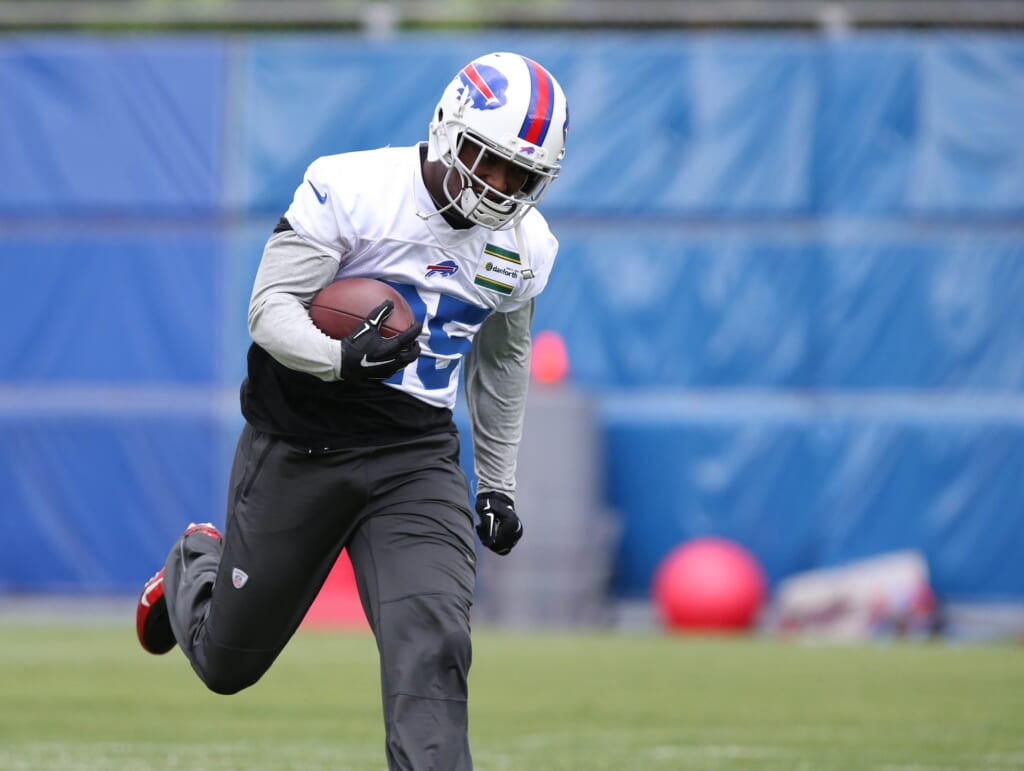 Courtesy of USA Today Sports: It will be interesting to see how McCoy performs in an entirely new situation.

I can’t wait for fans in Western New York to throw a fit over this ranking. Bring it, guys and gals. McCoy is averaging over 1,500 total yards and nearly 10 scores per season during his six-year NFL career. He’s coming off back-to-back seasons that saw him tally a combined 3,600 total yards. At this rate, McCoy will have put up over 18,000 total yards if he plays at the same level until his 32nd birthday. That’s all find and dandy.

That’s also using a fantasy football mentality to analyze a player’s overall success on the field—something I have admittedly done a bit in this piece. Though, McCoy’s advanced stats are not too friendly.

Last season saw McCoy average 2.1 yards after contact per rush. That was good enough for a No. 41 overall ranking among running backs. For comparison’s sake, Marshawn Lynch put up a near-yard more per attempt. In fact, the likes of Jordan Todman, Roy Helu, Chris Johnson and Trent Richardson all ranked ahead of McCoy in this category (via Pro Football Focus, subscription required).

Why is this stat so important? McCoy goes from an Eagles team that ranked No. 1 in the NFL in run blocking to a Bills squad that ranked 31st. He also goes from a quarterback-friendly scheme under Chip Kelly to the likes of EJ Manuel, Matt Cassel or Tyrod Taylor handling the signal caller duties in Buffalo. If McCoy doesn’t have the necessarily holes to run through, he’s not going to be a top-end running back in the NFL. That’s the harsh reality of the situation.

Lacy is blessed with the ability to play with a quarterback in Aaron Rodgers that forces defenses to play the pass more than the run. Outside of his pure talent, that’s one of the primary reasons that Lacy has tallied over 3,000 total yards and 24 touchdowns in his first two NFL seasons. It’s also one of the primary reasons his production isn’t going to dip any time soon.

This former second-round pick is averaging a ridiculous 97 total yards per game in his career. He’s doing so with an average of less than 20 total touches per outing. What makes Lacy so special in comparison to other young running backs is the fact that he entered the NFL with a three-down capability due to his plus-level blocking ability—something that has become all too evident during his short career. It’s also something that the Packers require in a running back ahead of the God himself, Aaron Rodgers