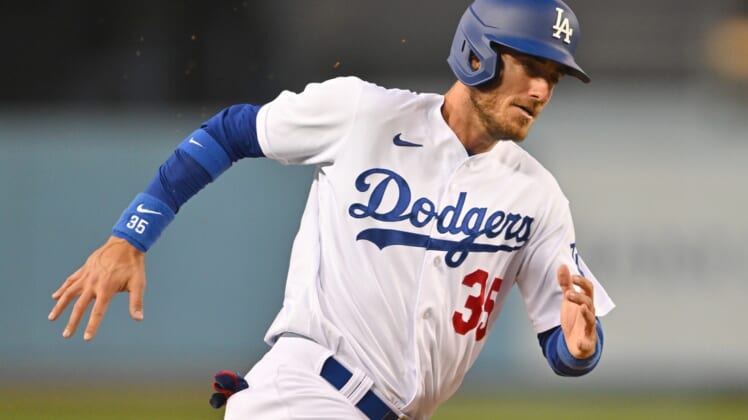 Edwin Rios hit a three-run home run in a six-run second inning and the Los Angeles Dodgers earned a doubleheader sweep of the visiting Arizona Diamondbacks with a 12-3 victory in the nightcap on Tuesday.

Freddie Freeman had three hits and three RBIs while Trea Turner had two hits and drove in four as the Dodgers won their fourth consecutive game following a four-game losing streak.

Los Angeles hit a season-high-tying four home runs in Game 1 and rallied for a 7-6 victory.

Trailing 2-0, the Dodgers tied the game in the bottom of the first inning on a two-run single from Turner, who hit a home run in the opening game.

A two-run double from Gavin Lux gave the Dodgers a 4-2 lead in the second inning. Turner struck again in the same frame with an RBI single for a 5-2 advantage.

Rios, starting a major league game in the cleanup spot for the first time, capped the second inning with a three-run shot to left-center, his fourth.

The Dodgers pulled away in the sixth inning on a two-run double by Freeman and a run-scoring throwing error by Arizona shortstop Geraldo Perdomo on a ground ball from Turner. Freeman had another RBI double in the ninth.

Dodgers starter Tyler Anderson (4-0) settled down from his shaky start to give up two runs on seven hits over seven innings with no walks and seven strikeouts.

Diamondbacks starter Merrill Kelly (3-2) gave up eight runs on five hits and four walks in two innings, with one strikeout. Kelly fell to 0-6 lifetime against the Dodgers in nine starts.

The Dodgers have trailed in every game of their four-game winning streak, which came after they gave up 29 total runs while losing three straight games to the Philadelphia Phillies.