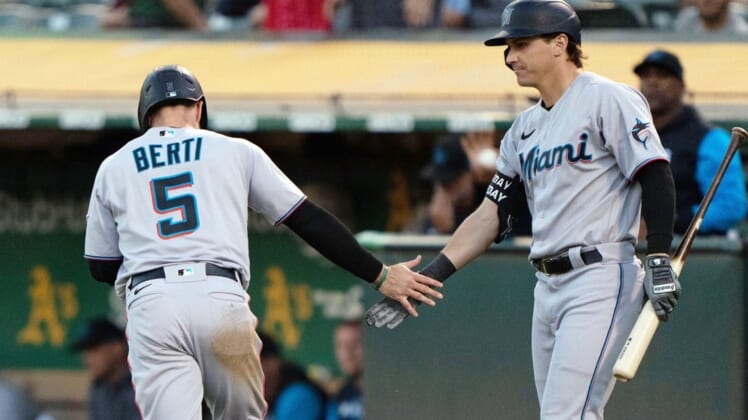 Brian Anderson and JJ Bleday added RBI doubles for the Marlins, who responded to a three-game shellacking in Los Angeles by the Dodgers to win for just the sixth time in their last 17 games.

Pitching for just the fourth time since returning from an elbow injury, Cabrera (4-1) walked the first two batters he faced before settling down to complete a career-best eight innings.

He allowed a bunt single to Skye Bolt leading off the third and a single to right-center by Tony Kemp immediately following, but navigated his greatest jam of the night by getting Jonah Bride to ground into a double play before striking out Sean Murphy to end the threat.

Cabrera walked Shea Langeliers with one out in the fourth, then retired the last 14 batters he faced to hand off a 3-0 lead to Tanner Scott in the ninth.

Scott allowed a one-out single to Murphy before setting down the final two A’s hitters to notch his 18th save and close out the Marlins’ ninth shutout of the season.

Since returning from his injury on Aug. 5, Cabrera has not allowed a run in 22 2/3 innings over four starts.

He walked three and struck out seven.

Leblanc’s homer, his second of the season, came off A’s starter Adam Oller (2-6), who worked six innings, allowing all three Marlins runs and five hits. He walked five and struck out two.

Leblanc’s only previous homer had come July 31 against the New York Mets in his second major league game.

Miami gave Cabrera its three-run cushion following a one-out walk to Jon Berti in the third. Anderson plated Berti with his RBI double to right field, after which Bleday drilled his two-bagger to left-center.

Bleday finished with two hits for the Marlins, who out-hit the A’s 7-3.

Facing Miami for the first time since 2017, the A’s recorded no extra-base hits. They were shut out for the 13th time this season.