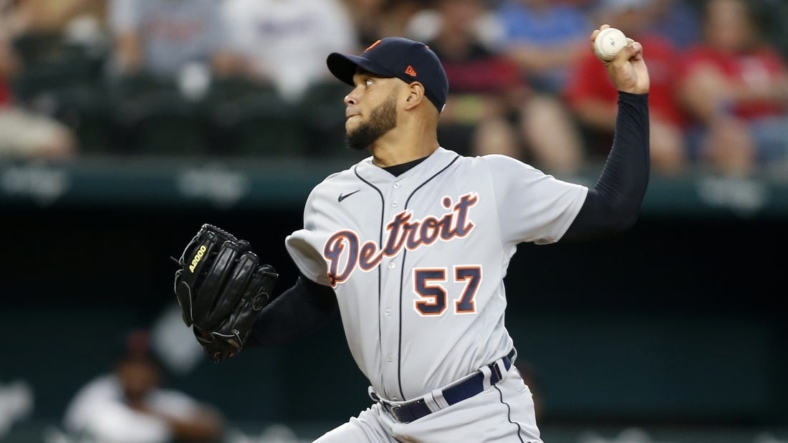 Eduardo Rodriguez’s first season with the Detroit Tigers has been marred by an injury and personal issues. Ever since his return to the rotation, Rodriguez has displayed why the club gave him a five-year, $77 million contract in free agency.

Rodriguez won his two starts in late August after an extended absence. He will aim for a third consecutive victory in the finale of a three-game series against the Seattle Mariners on Thursday afternoon.

The former Boston Red Sox left-hander was sidelined in May by a rib cage injury. Upon recovering from that ailment, Rodriguez left the team to deal with marital problems and was placed on the restricted list.

Following a rehab assignment, Rodriguez (3-3, 3.60 ERA) held the Los Angeles Angels scoreless for five innings on Aug. 21. In his latest outing, he limited the Texas Rangers to one run in six innings on Saturday.

He got plenty of support that night, as Detroit scored 11 runs and turned four double plays.

“When we score runs like that, you just have to go and attack,” Rodriguez said. “I feel like it was one of those lucky days where you feel glad you have that kind of defense behind you. A lot of line drives, lot of ground balls with guys playing in the right places.”

Rodriguez has a 4-3 record and 3.46 ERA in nine career starts against the Mariners.

In five August starts, Gilbert posted a 6.75 ERA, but he showed good command in his latest two outings. Gilbert didn’t issue a walk during those 11 1/3 innings while giving up two runs to both the Oakland A’s and Cleveland Guardians. The Mariners won the latter game, on Friday, in extra innings.

Gilbert lost his only career outing against the Tigers on May 19, 2021, when he gave up three runs on four hits in 2 2/3 innings. He will be pitching in Detroit for the first time.

Both teams are fortifying their benches when rosters expand on Thursday. Seattle will activate left-handed pitcher Matthew Boyd and outfielder Taylor Trammell, while the Tigers are bringing up first baseman Spencer Torkelson and infielder Ryan Kreidler.

Boyd started 143 games for Detroit from 2015-21, but he will be used as a leverage reliever by the Mariners. He was signed by the San Francisco Giants as a free agent in March while recovering from left flexor tendon surgery. Boyd was acquired by the Mariners in a deal at the trade deadline but has yet to make his major league season debut.

“He can’t wait to help us on the field,” Seattle manager Scott Servais said. “He’s very anxious to get there and see what he can do. It’s been awhile. He’s been hurt and he’s dealt with a lot of things, but I’m anxious to have him join our bullpen.”

“We know he’s not a finished product yet,” Detroit manager A.J. Hinch said, “but the work he’s put in has been substantial and the gains he’s getting have been OK. We still hope there’s more in there to develop.”

Seattle has won the first two games of the series, hitting five home runs in the process.

“The home run ball has been our secret weapon here lately,” Servais said.