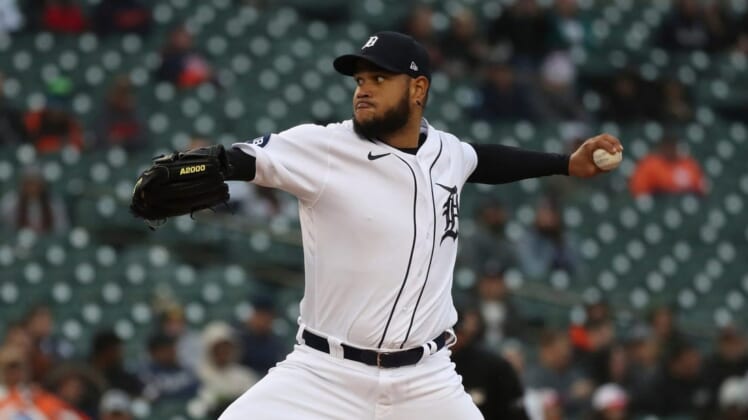 Eduardo Rodriguez will make his long-awaited return to the mound for the host Detroit Tigers on Sunday.

Rodriguez was signed to a five-year, $77 million contract as a free agent last offseason to be one of the Tigers’ top starters, if not their ace.

Following eight unimpressive starts, Rodriguez (1-3, 4.38 ERA) was sidelined in May by a rib-cage strain. After he recovered from the injury, Rodriguez left the team and was placed on the restricted list due to marital issues.

It turned out to be a lengthy absence.

Rodriguez prepared physically for his return by making three minor league starts this month, including a six-inning stint with Triple-A Toledo on Tuesday. He struck out 11 Columbus batters and allowed only one run.

“It’s a difficult situation for him and for everybody,” Hinch said. “And it’s personal. He did an incredible job of re-entering our team. But with anything in life, actions are going to back that up. This is a life experience he’s going through, and it is tough. He’s very vulnerable, standing in front of those guys and saying the things he said that are private. It’s tough, and I applaud him for having the perspective to do that. We are glad to have him back.”

Rodriguez is 1-2 with a 9.24 ERA in three career starts against the Angels.

Ohtani (10-7, 2.69) has pitched six innings in each of his last two starts, most recently against Seattle on Monday. He allowed two runs and seven hits and struck out eight.

Ohtani has added a two-seam fastball to a repertoire that includes a four-seamer, slider, splitter, curveball and cutter.

“The biggest flaw for me (Monday) was throwing too many balls. I was messing with my (two-seamer) playing catch and in bullpens,” Ohtani said through an interpreter. “I felt it was time to break it out.”

Ohtani had two hits and a run on Saturday, though he also fouled a ball off his foot and struck out in his last at-bat during the Angels’ 4-3 loss to the Tigers.

Los Angeles’ Mike Trout went hitless in four at-bats in his second game since coming off the injured list. The Angels scored all of their runs in the first three innings.

Reid Detmers gave up all of Detroit’s runs.

“We hit some balls hard,” Angels interim manager Phil Nevin said. “He (Detroit starter Tyler Alexander) settled in, and Reid didn’t. That’s kind of the difference in the game.”