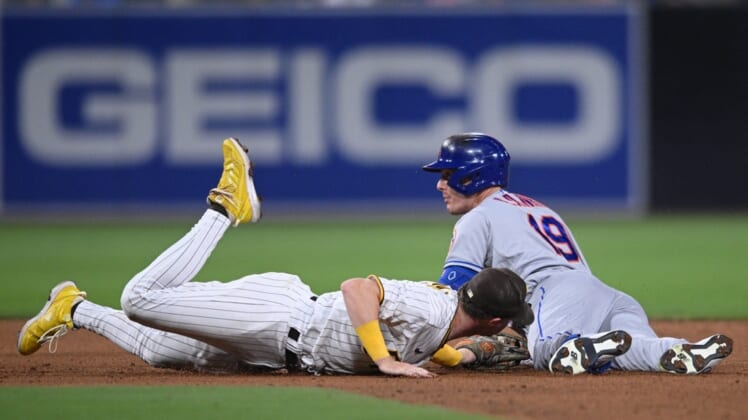 Escobar finished 4-for-5. His single, homer and triple drove in two runs apiece. Escobar logged the 11th cycle in Mets history but the first since Scott Hairston accomplished the feat in 2012.

Escobar opened the fourth with a double and scored on Brandon Nimmo’s single. After popping out to shortstop in the fifth, Escobar hit a two-run homer to right off Padres reliever Craig Stammen in the eighth.

An inning later, Escobar completed the cycle with a two-run triple off the angled wall in right at Petco Park off Tim Hill, igniting a four-run inning that put the game away. The cycle was also the first ever at Petco Park, which opened in 2004.

The Mets had a total of 16 hits, with Starling Marte, Mark Canha, Jeff McNeil and Tomas Nido each registering two hits.

Carrasco (7-1) won his sixth straight decision in the first appearance of his 266-game career against the Padres. He didn’t issue a walk while posting season highs of 10 strikeouts and 105 pitches.

The Mets scored three runs in the first with the help of three straight walks by Snell in front of Escobar’s single. Marte singled with one out and stole second but was still at second with two outs when Snell walked Pete Alonso, Canha and J.D. Davis in succession.

The Padres scored in the bottom of the third on a Jorge Alfaro double and a Jurickson Profar RBI single.

The Mets added single runs in the fourth and fifth off Snell, who lasted four-plus innings. He gave up five runs (four earned) on seven hits and the three first-inning walks while striking out four.

The Padres cut the deficit to 5-2 on Nomar Mazara’s RBI double in the seventh before the Mets stretched the lead to 7-2 in the top of the eighth with Escobar following Davis’ leadoff single with his home run to right.

Luke Voit hit a three-run homer in the bottom of the eighth off Drew Smith to pull the Padres to within 7-5. Third base umpire Tom Hallion originally called the Voit hit a double, but a video review determined the ball landed over the wall.