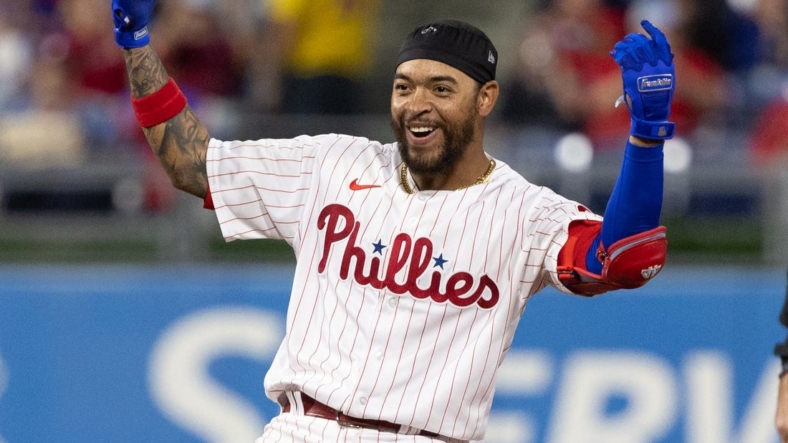 When the Philadelphia Phillies acquired utility infielder Edmundo Sosa from the St. Louis Cardinals just before the trade deadline, it seemed like a rather insignificant move.

Sosa has suddenly become one of the hottest hitters in Major League Baseball and he sparked the Phillies with three hits, including a home run, and three RBIs in a 4-3 win over the Miami Marlins on Wednesday.

The Phillies (75-61) will look for the three-game series sweep when they host the Marlins on Thursday.

Now it’s going to be tough to keep Sosa out of the lineup.

Over his last 10 plate appearances, Sosa is 8-for-9 with two home runs, four doubles, five RBIs and five runs scored.

“I feel really, really happy,” Sosa through an interpreter on a postgame interview on NBC Sports Philadelphia. “I’m happy to help the team win. I know my role.”

After a home run and double on Tuesday, interim manager Rob Thomson opted to give Sosa another start in place of Bryson Stott.

That turned out to be a wise decision.

“I really know what I have to do to fulfill my role,” Sosa said. “It helps me when I’m called on to play.”

The Phillies will hand the ball to Kyle Gibson (9-6, 4.48 earned run average). In Gibson’s last start against the San Francisco Giants, he allowed five hits and seven runs in only 1-2/3 innings.

Gibson is 1-3 with a 4.80 ERA in five career starts against the Marlins.

Bryce Harper appeared to injure his left side on a swing in the sixth inning but stayed in the game. Thomson called it a “stinger,” didn’t believe it was serious and said that Harper would be re-evaluated on Thursday.

The struggling Marlins (55-80) will hope to avoid a 10th consecutive loss and a series sweep in the finale.

The Marlins dropped another tough close game for their ninth straight defeat on Wednesday.

In the end, it wasn’t enough. Again.

“The guys are continuing to go out and continuing to fight,” Marlins manager Don Mattingly said. “That’s what we ask for at his point. We’d like to get on the other side of this.”

Sandy Alcantara (12-7, 2.36), the Marlins’ ace, is scheduled to start Thursday. In Alcantara’s last start against the Atlanta Braves, he was surprisingly inefficient as he gave up seven hits and six runs in five innings.

“I just think tonight he got hurt with the breaking ball,” Mattingly said after Alcantara’s last outing. “That’s a good club over there. He just left some breaking balls. I thought he had a good fastball today. It looked like his stuff was good. I just thought maybe he was getting a little forward in his delivery or something. The arm drags. He left a couple of breaking balls that just looked like they didn’t turn.”

Tanner Scott, who injured his back in the weight room last week, could be available in the bullpen for Thursday. Mattingly said that Scott threw a successful bullpen session before Wednesday’s game.