Edison Flores scored his first goal for D.C. United, more than a season after he was signed for a club-record transfer fee, and that was all the hosts needed in a 1-0 victory over the Chicago Fire on Thursday night.

United States international Paul Arriola also made his season debut as a substitute for D.C. after rehabbing from a quadriceps injury he suffered while on loan at Swansea City.

Chicago (0-4-1, 1 point) was held scoreless for a third consecutive match, now having gone 314 total minutes without scoring. The Fire outshot D.C. 15-12 but trailed 4-3 in attempts on goal.

Midfielder Fabian Herbers made his return for the Fire after working back from a knee injury and struck the crossbar on a late chance to level the match. 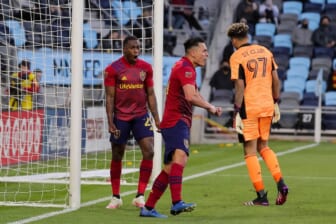 In a rare start at striker rather than attacking midfield, Flores put D.C. in front after only seven minutes.

Andy Najar and Moses Nyeman connected on a slick attack down the right before giving the ball to Perez inside the 18-yard-box. Perez crossed the ball back toward the 6-yard box, where Flores guided in a first-time header past Bobby Shuttleworth (three saves).

Julian Gressel struck the goal frame on an attempt that would’ve doubled D.C.’s lead in the 21st minute on a first-time effort from just inside the 18-yard area.

On the other end, Brian Gutierrez had the best chances of the first half, forcing Kempin into a reaction save from a first-time volley before later striking the woodwork himself in the 37th minute.

Hebers again hit the crossbar in the 92nd minute on a header while under defensive pressure from Frederic Brillant. But between those moments there was little in clear chances for the Fire.