Eddie Lacy not yet at target weight for Packers 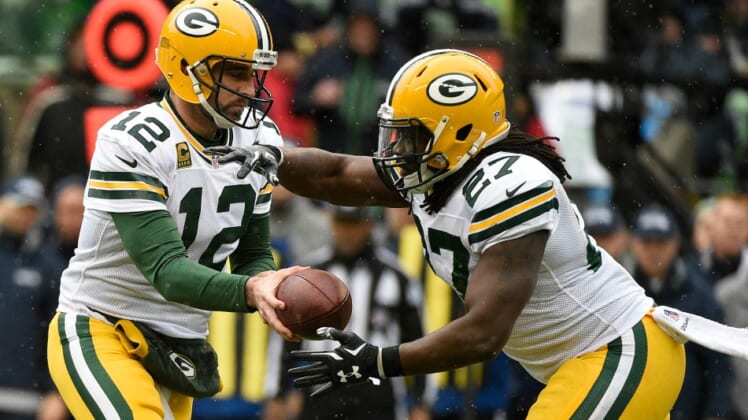 Green Bay Packers running back Eddie Lacy has been working to drop the extra weight that caused him to post record-low numbers in 2015.

Even though Lacy had reportedly lost 15-18 pounds when the Packers began their offseason in April, head coach Mike McCarthy indicated that Lacy hasn’t quite reached an ideal weight.

“Eddie will be fine,” McCarthy said per Rob Demovsky of ESPN. “I believe he’ll hit the target that we’re all looking for when the lights come on.”

McCarthy also commented on Lacy’s current weight-loss progress stating, “so far, so good,” according to the report. He is still “in the 240s” at this time.

Lacy has added both boxing and basketball for cardio to his workouts in addition to P90X training.

Knowing that his weight impacted his performance last year, Lacy wasn’t offended at McCarthy’s comments regarding his condition.

“At the end of the day, we’re all grown men. Whether he calls me out, I just have to take care of that responsibility. You don’t get mad or [lash] out or anything like that. You just take it as it is what it is and make it go away.”

Lacy, who is 5-foot-11, entered the league at 231 pounds in 2013. His rookie campaign was by far Lacy’s best when he recorded 1,178 rushing yards and 11 touchdowns. The extra pounds Lacy has packed on since, caused his production to tumble resulting in only 758 rushing yards and three touchdowns in 2015.

Losing weight is critical, and it appears Lacy gets it. His starting job with the Packers will be at stake should Lacy churn out another stinker of a season.