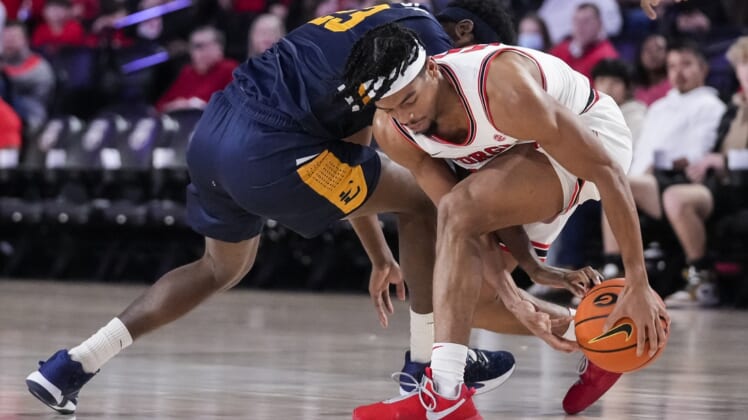 David Sloan’s 3-pointer with 8.4 seconds left capped East Tennessee State’s rally from an eight-point deficit with four minutes left and lifted the Buccaneers to an 86-84 win over Georgia in a nonconference game on Wednesday in Athens, Ga.

Ledarrius Brewer and Mohab Yasser each added 12, while Ty Brewer added 10 for the Buccaneers (8-5), who ended a two-game slide.

Cook’s 3-pointer with four minutes to go pushed Georgia’s lead to 82-74 before East Tennessee State responded with an 8-0 run to tie the game at 82 when Yasser made 1 of 2 free throws with 57 seconds left.

After Noah Baumann’s jumper gave Georgia an 84-82 lead with 35 seconds left, Sloan hit his clutch 3-pointer from the right wing. Baumann missed a 3-point attempt in the final seconds, and King made a free throw to cap the scoring.

East Tennessee State could have won more comfortably had it not missed 11 of it first 12 free-throw attempts before finishing the game 5-for-18 from the line. The Buccaneers entered the game fourth in Division I in free-throw percentage (81.02 percent).

Georgia was led by Baumann, who scored 25 points on 8-for-10 shooting that included him making 7 of 9 3-point attempts. Cook scored 14 of his 17 points in the second half, while Kario Oquendo scored 11 of his 15 in the final 20 minutes as Georgia nearly rallied for the win.

Trailing 48-39 at halftime, the Bulldogs opened the second half on a 17-10 run to pull to within 58-56 following Dalen Ridgnal’s jumper with 14:54 left. But Ty Brewer followed with a layup and Ledarrius Brewer soon after to push the lead 62-56.