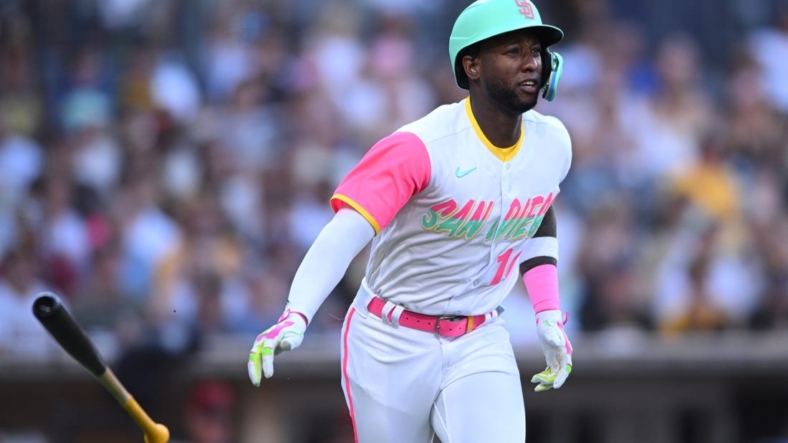 Wil Myers snapped a 3-3 tie with his 150th career homer in the fourth inning and Yu Darvish overcame three Diamondbacks homers — including a pair by Daulton Varsho — Wednesday night as the San Diego Padres defeated visiting Arizona 6-3 in the rubber match of a three-game series.

Coupled with Milwaukee’s 8-4 loss at Colorado, the Padres now have a four-game lead on the Brewers for the third wild-card spot in the National League.

Darvish (13-7) gave up three runs — all solo homers — on five hits and three walks with six strikeouts in six innings to earn the win.

Trailing 4-3, the Diamondbacks had runners at the corners with one out in the fifth when Darvish got Ketel Marte to ground into a double play. Two innings later, with the Padres holding a two-run lead, Corbin Carroll led off with a double ahead of Darvish walking Cooper Hummell.

After Roberto Suarez came on in relief, Carroll was thrown out by catcher Austin Nola trying to steal third — marking only the eighth time this season that a Padres catcher has thrown out a runner. After Alek Thomas walked, pinch-hitter Christian Walker grounded into an inning-ending double play.

The teams had three home runs apiece in the first six innings.

Varsho and Carroll went back-to-back in the top of the second to give the Diamondbacks a quick 2-0 lead. Carroll’s homer to center was the first of his career.

But the Padres responded with three runs in the bottom of the second on their own pair of homers. In the bottom of the inning, Josh Bell drew a lead-off walk from Arizona rookie left-handed starter Tommy Henry and came around on Jurickson Profar’s two-run homer to right. After Henry retired Myers on a fly to right, Jake Cronenworth homered for the second straight game.

Profar’s home run was his 14th of the season. Cronenworth hit his 15th.

Varsho hit his third homer in two games and 23rd of the season in the top of the fourth to tie the score at 3-3. Myers answered in the bottom of the inning with his fourth homer of the season — and his third in the last 10 games — to put the Padres ahead 4-3.

The Padres added a fifth run in the fifth when Trent Grisham singled, stole second and scored on a single by Bell. Nola hit a one-out single by Joe Mantiply in the eighth and came around on Ha-Seong Kim’s two-out double to make it 6-3.

Struggling Josh Hader pitched a perfect ninth — thanks partly to a running catch by Jose Azocar in right center — for his 31st save.