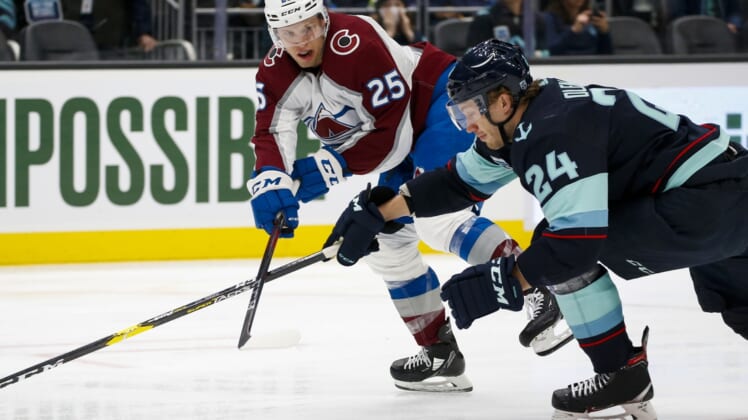 The Kraken used three early goals to secure their first-ever three-game winning streak, as Seattle recorded a 3-2 victory over the visiting Colorado Avalanche on Wednesday.

Kole Lind, Jordan Eberle, and Yanni Gourde all scored within the game’s first 15 minutes, giving Seattle (26-44-6, 58 points) a lead it would never relinquish.

The Avalanche (55-16-6, 116 points) remain tied on points with the Florida Panthers in the Presidents’ Trophy race, with Colorado leading on a tiebreaker.

Cale Makar and Artturi Lehkonen scored for the Avalanche, who have lost their last two games. Colorado has just five multi-game losing streaks this season.

Kraken goaltender Philipp Grubauer stopped 25 of 27 shots for his 18th win of the season.

Lind’s goal put the Kraken ahead just 72 seconds after the opening whistle. A long dump-in pass deflected off the boards right to a racing Lind, and the forward deposited his second goal.

Eberle followed up 5:23 into the first period, firing a shot over the shoulder of Avalanche goalie Pavel Francouz. It was Eberle’s 19th goal of the season.

Gourde deflected a Jared McCann shot past Francouz at the 14:44 mark to extend Seattle’s surprising lead, though the Avalanche responded before the first intermission. Makar scored a tremendous goal at 17:37 of the opening period, combining with Nazem Kadri on a close-range passing play.

After all of the first period’s action, neither team scored until Lehkonen’s tally at 16:40 of the third period.

Kadri was back in Colorado’s lineup after missing eight games with an upper-body injury. However, Avalanche points leader Mikko Rantanen didn’t play due to a non-Covid illness.

Seattle forwards Victor Rask and Matty Beniers each recorded an assist to extend their respective points streaks to four games. Beniers has two goals and two assists in his four career NHL games.