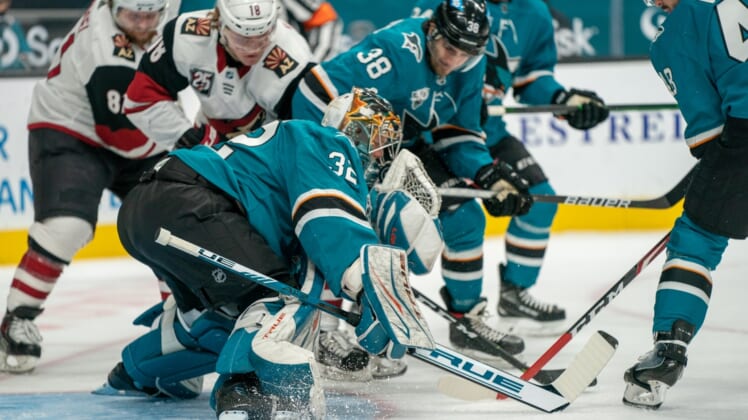 San Jose scored three first-period goals and Josef Korenar made 28 saves as the Sharks held on to defeat the visiting Arizona Coyotes 4-2 on Wednesday night.

Phil Kessel and Johan Larsson were the goal-scorers for the Coyotes. Darcy Kuemper, who was taken out of the Coyotes’ 6-4 loss at San Jose on Monday, made 27 saves on Wednesday.

Alexander Barabanov set Kane up to score his 20th goal of the season and put the Sharks on top 1-0 at 1:12 of the opening frame.

Balcers doubled the lead at 10:06 as he caught a burst of speed from the blue line and backhanded the puck in behind Kuemper’s skate.

Labanc made it 3-0 at the 14:08 mark as Kuemper was caught out of position after San Jose center Alexander True set up the play.

Kessel put Arizona on the board during a delayed penalty on San Jose the when he redirected a shot from Nick Schmaltz to make it 3-1 at 15:47 of the first period. The Sharks took the two-goal lead into the first intermission despite being outshot by the Coyotes 13-8.

Larsson pulled the Coyotes within a goal at 4:40 of the second period when he knocked on a loose puck in front of an open net. Both teams got opportunities on the power play later in the period, but neither side could convert.

San Jose couldn’t convert on a two-man advantage in the middle of the third period, and the game ended in the four-on-four after penalties on both teams. Arizona pulled Kuemper for an extra skater, leaving the door open for Hertl to bury the empty-net goal with 37 seconds left.