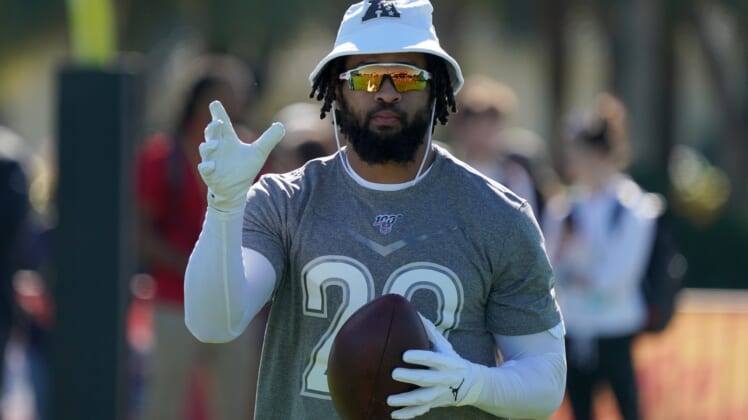 Earl Thomas, the former All-Pro safety who has spent the entire 2020 season out of the NFL, is now facing alarming allegations from his estranged wife following an alleged incident on Christmas.

Thomas, who was previously involved in an altercation with his wife, and Nina Thomas filed for divorce in November. The two reportedly came together over the holidays with family, when the alleged drunken act of violence occurred.

According to TMZ Sports, Nina Thomas filed a restraining order against Earl Thomas, seeking a mandated separation following an alleged violent incident around the holidays.

In a police report, obtained by TMZ Sports, the former NFL star’s wife says she is “scared” of him and wants him to be kept away due to concerns that he is a “clear and present danger” to her safety.

Related: What’s going on with Earl Thomas? Will he find new NFL team in 2021?

She says that Earl spent the evening of Christmas Day drinking and sent her harassing text messages. The following morning, Thomas is accused of showing up visibly intoxicated and started using vile language in front of their young daughter. Nina Thomas then went to his car to retrieve some of her children’s things from his vehicle. When Earl started screaming at her in the front yard, she returned inside and locked the doors.

At that point, according to court documents, Thomas, became irate and started beating on the windows of the home and broke through the glass. After calling Earl’s mother to try and assist with calming the 31-year-old down, but the attempts to ease the situation were unsuccessful.

Law enforcement later arrived, reporting to calls for a disturbance at the home. A short time later, according to police documents, they met with Earl at the hospital. After receiving treatment, he admitted to breaking the window. The case is now deemed inactive by local law enforcement, but the allegations have continued.

In the court documents to obtain a restraining order, Nina says Earl continued to show aggressive intentions towards her and her family.

She accused Thomas of several incidents throughout their relationship, using both physical and emotional abuse against her.

Thomas denied the accusations to TMZ, but a judge’s order will require he stays 400 feet away from Thomas, her home and the children’s school. He is scheduled to meet before a judge in a video conference later this month.

Earl Thomas never played for an NFL team this season. The Baltimore Ravens released him after being sent home for punching a teammate. He was scheduled to work out for the Houston Texans in September, but that was canceled after players voiced concerns.

Given his age, off-field concerns and potential locker room problems, there’s a possibility that Thomas’ days in the NFL are over.