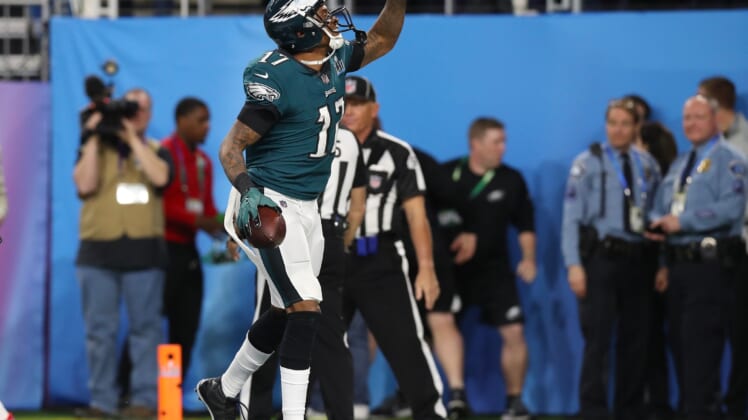 Last season, Philadelphia Eagles wide receiver Alshon Jeffery landed on injured reserve with a Lisfranc injury to his right foot. He may remain out of commission when the team opens the 2020 season, too.

Eagles still have no timetable for Alshon Jeffery to return

Speaking to reporters about Jeffery and the injury that took him out last season, head coach Doug Pederson said the rehab has gone “extremely well.” He also made it clear “there’s no timetable for him right now.”

“Alshon has done extremely well this off-season with his rehab,” Pederson said, per Josh Alpert of Pro Football Talk. “The dialogue that he’s had in the receiver room, being able to converse with some of the young players that we have on our roster and just getting themselves back healthy and obviously there’s no timetable for him right now.”

Then Pederson hinted the Eagles could start the season without Jeffery in the lineup.

“I just want him to focus on his rehab and get strong, but the second part of your question is, he’s a big part of our offense, and we do plan to have him in the offense at some point,” Pederson added. “But if there’s a couple games there where he’s not ready, then, we’re not going to put him out there and just wait for him to get healthy.”

The big question at this point is: Even when Jeffery is healthy, is he worth the money?

Alshon Jeffery contract is a big problem for the Eagles

When the Eagles inked Jeffery to a four-year, $52 million contract extension in 2017, he was having one of the best seasons of his career. That season, Jeffery caught 57 passes for 789 yards and nine touchdowns — the second-highest total of his career.

Since then, Jeffery has taken some blows on the injury front. He had offseason shoulder surgery before the 2018 season. Then last year he dealt with a calf injury, hip injury and foot injury.

The Eagles are still on the hook for two more years and owe Jeffery $26.1 million in guaranteed money. So, he needs to get back to his full effectiveness for the franchise to feel good about this contract.