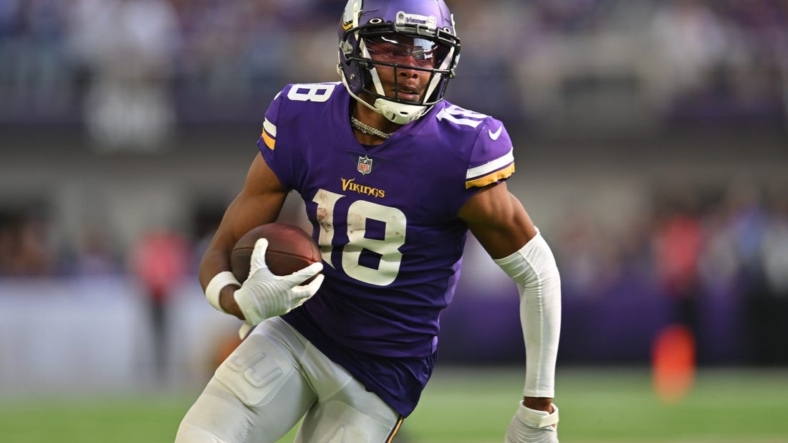 Considering the Detroit Lions dented the Eagles defense for 35 points, Justin Jefferson and the Minnesota Vikings could do some serious damage Monday night in Philadelphia.

Jefferson caught nine passes for a career-high 184 yards and two touchdowns Sunday as the Vikings (1-0) opened the season with a 23-7 victory against the rival Green Bay Packers.

Jefferson kept Green Bay guessing in new coach Kevin O’Connell’s offense, lining up all over the field. According to ESPN research, he became only the second player since 2015 with at least 90 yards from both the slot (91) and the outside (93). A big part of the equation was working Jefferson against linebackers and safeties in coverage, with the Vikings manipulating defenders to set up that scenario on more than 60 percent of Jefferson’s snaps.

“I definitely like the motioning and just seeing the whole field,” said Jefferson, who set the NFL record with 3,016 receiving yards in his first two seasons in 2020-21. “I’m pretty sure I’m going to do it a lot more.”

The Vikings gained nearly 400 yards and didn’t turn the ball over against the Packers. Dalvin Cook contributed 108 yards from scrimmage and Kirk Cousins passed for 277 yards and was sacked only once.

“When the ball goes up you expect him to get it,” Cousins said of Jefferson on “The Dan Patrick Show.” “I pride myself on being an accurate quarterback … but I don’t have to be quite as accurate for him.”

Cousins is 6-3 as a starter against Philadelphia, including his tenure with Washington and wins with Minnesota in 2018 and 2019. Cousins also started 0-9 in his career in Monday night games before winning his last two, both at Chicago (2020 and 2021).

The Eagles (1-0) also opened the season with a strong performance from a wide receiver. Making his Philadelphia debut, A.J. Brown caught 10 passes and matched his career high with 155 yards at Detroit.

Brown broke the franchise record for receiving yards by a player in his first game with the team, previously held by Donte’ Stallworth with 141 in 2006.

“I know there were some greats that played here before me,” said Brown, a two-time 1,000-yard receiver with the Titans who was acquired in an April trade with Tennessee. “It’s kind of overwhelming that I get to scratch my name in that book. I’m blessed.”

Brown’s connection with quarterback Jalen Hurts (243 passing and 90 rushing yards) was nearly wasted. The Eagles led by 17 entering the fourth quarter and held on for a 38-35 win at Detroit.

Philadelphia lost pass-rusher Derek Barnett to a torn ACL in the win over the Lions. Tight end Jack Stoll (ankle) was a limited participant in Wednesday’s practice.

The Eagles will see a familiar face on Monday night in Vikings wideout Jalen Reagor. Drafted by Philadelphia in the first round in 2020 (one spot ahead of Jefferson), Reagor caught only 64 passes in 29 games with the Eagles before being traded to Minnesota on Aug. 31.

Minnesota cornerback Andrew Booth (quad) did not practice Wednesday. Rookie safety Lewis Cine, the Vikings’ first-round pick, returned to the field after missing the opener with a knee injury.