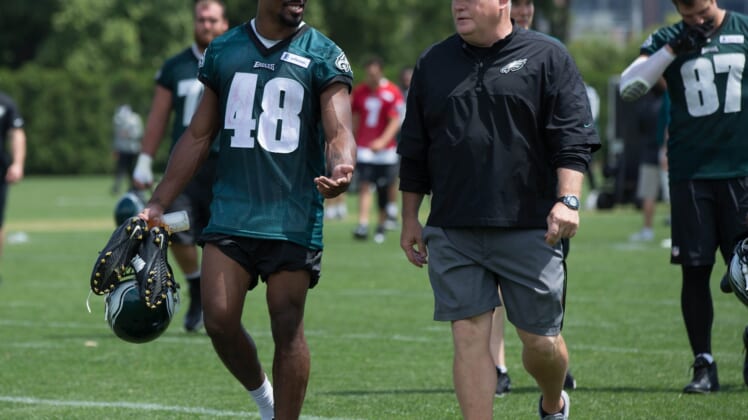 Without saying a word, LeSean McCoy made big news on Thursday when Philadelphia Eagles head coach Chip Kelly revealed the running back hadn’t returned his calls. Kelly tried getting in touch with McCoy to discuss his former player’s comments regarding racism, but he was rebutted with silence.

When asked if he’d discussed the matter of race with the players in his locker room, Kelly told members of the media he hadn’t brought it up with them. He then told reporters, “That’s a great question to talk to the players about,” per John Gonzalez of CSN Philadelphia.

Not surprisingly, they went straight to work to uncover if there really was any tension within Philadelphia’s locker room towards Kelly.

New running back DeMarco Murray, who happens to be African-American, couldn’t help but laugh when McCoy’s comment was brought up.

“I’m looking around,” Murray said with a smirk. “There are a lot of us out here. I’m not sure about that.”

Cornerback Malcolm Jenkins was brought in as a free agent last year, under Kelly’s tenure. He, also being African-American, took exception to the notion that any of Kelly’s personnel decisions are now, or have ever been, based on race.

Instead, he broke down exactly how transparent Kelly and his staff are about all the things that are expected of players on the Eagles roster.

“Chip has been very, very transparent on what he’s evaluating us on,” Jenkins said. “That’s not only what we do on the field, but what we do in our assessments and how disciplined we are with our nutrition and all the sports science stuff. I haven’t seen him make a move outside of those parameters. I don’t think anybody in the locker room now thinks we have an issue with race.”

Former Eagles offensive lineman Todd Herremans is no stranger to being the target of Kelly’s personnel decisions. He was released by Philadelphia in late February in a cost-cutting move. He, being white, quipped recently that Kelly is “equally racist to all races… which I guess would make him… not racist,” in response to McCoy’s off-the-wall statements.

Another current player, tight end Zach Ertz (also white), didn’t react with humor to McCoy’s statements and the unwanted media attention that stemmed from them, per Gonzalez.

“The tight end said he doesn’t know how McCoy’s remarks ‘could have any justification’ and added that the Eagles have a lot of ‘talented African American players.’ Ertz noted that the Eagles replaced McCoy with Murray, and he cited Malcolm Jenkins as a talented black player. So did Jason Kelce.”

Whether they be black or white, Kelly appears to have the full support of his current roster, and at least one former player, when it comes to race. McCoy is the only player to have ever made any public accusation against Kelly as a potential racist, both at the professional and college levels.

What all this seems to indicate is that McCoy was, and still is, harboring resentment over the fact that Kelly saw him as expendable. His original comments seem to be nothing more than sour grapes, and the petulant response to ignore Kelly’s calls recently mirror that of a teenager who has been kicked out of the house for refusing to follow the rules.

McCoy never did seem happy about the way Kelly did things in Philadelphia. He lamented the “track meet” practices and at one point had to be taken aside by Kelly during a practice last October after the offense ran a drill.

Therefore it isn’t really a shock that Jenkins told reporters he and teammate Travis Kelce weren’t surprised when McCoy was traded this winter. Everybody could apparently tell McCoy wasn’t buying into Kelly’s way of doing things.

Now that the media has had a chance to get answers from the players who would be affected most by any notion of racism under Kelly’s leadership, perhaps it is time to grill McCoy about the whole thing. Kelly’s current players would apparently rather be left alone about the matter so they can just get back to work.