Eagles ‘optimistic’ Carson Wentz will be ready for OTAs 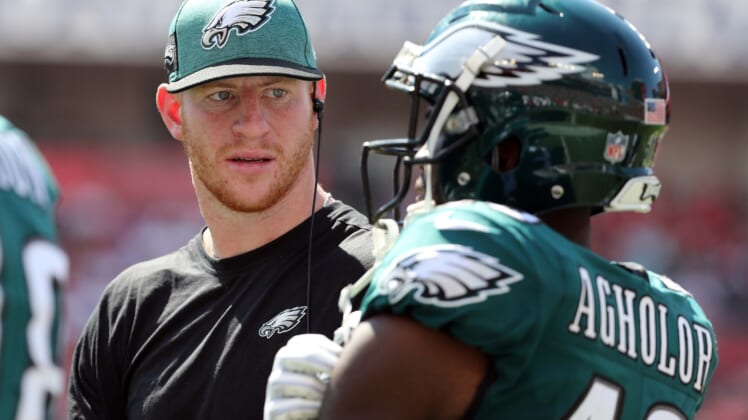 The Philadelphia Eagles are feeling good about the chances quarterback Carson Wentz will be “ready to go” in time for OTAs later this spring.

“Obviously, he’s still rehabbing and getting himself healthy and strong,” the coach said Tuesday in a roundtable interview at the NFL annual meeting, per Zach Berman of Philly.com. “Just like we’ve done in the past with him, we’re going to be patient and let him get strong. We’re not putting any timetable on it. When he’s ready, he’s ready. And we’re optimistic that he’ll be ready to go for OTAs, but we’re not going to push it and force anything.”

Philly has its sights set on making Wentz a very rich young man soon on a contract extension. And after letting Nick Foles hit the open market it’s clear they are all-in on the young gunslinger.

Wentz has missed significant time due to injuries the past two years in a row. He missed the final three games of the 2017 season and all of the team’s Super Bowl run after suffering an ACL tear that year. Then last season, a stress fracture in his back caused him to miss five regular-season games and the team’s postseason games as well.

When healthy, Wentz has been rock solid. He was playing at an MVP level in 2017 before the knee injury and had a solid campaign last year. All told, he’s completed 63.7 percent of his passes for 10,152 yards with 70 touchdowns and 28 interceptions in 40 starts since the Eagles selected him second overall in the 2016 NFL Draft.