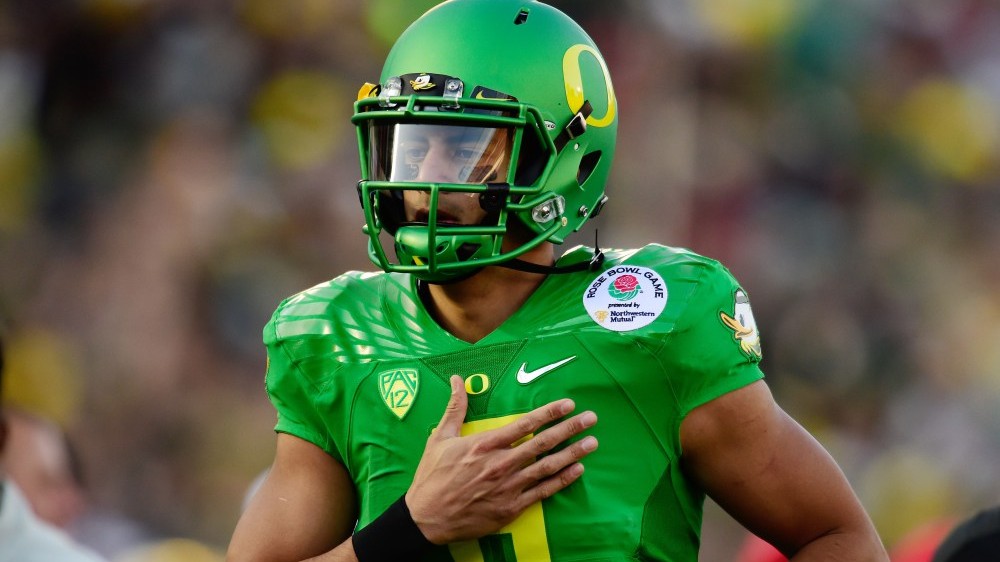 The NFL draft isn’t until April 30th, but it’s still always fun to prognosticate where certain players will end up, especially the potential franchise quarterbacks.

In this draft, barring anything unforeseen, there will be two signal callers selected in the first round. Oregon’s Marcus Mariota and Florida State’s Jameis Winston. Both bring different qualities to to the table, despite being similar in stature. Mariota, listed at 6’4″ and 219 pounds, is the more mobile of the two, and is definitely the more accurate passer outside the pocket. Winston, who’s listed at 6’4′ and 230, is more of the prototypical NFL quarterback, meaning he’s a pocket passer first and foremost, but one that can also beat you with his legs if necessary.

For the sake of this article, we’re going to be focusing strictly on Mariota and the most ideological landing spot for him come April.

The most optimal fit for Mariota would be the Philadelphia Eagles. Chip Kelly is Mariota’s former college coach and had very high praise of Mariota recently.

He might be the fastest guy on the field. but his mind is even faster, (he) thinks like Peyton Manning.

Not a bad comparison if I do say so myself. Being mentioned in the same breath as arguably the greatest regular season quarterback in history is quite the approbation.

The Eagles run a spread offense under Kelly, much like the system he ran at Oregon. In order for that type of offense to be successful, it needs an athletic, mobile quarterback who can deliver the ball quickly and on target. The past two seasons we’ve seen flashes of Kelly’s brilliance. It would be really intriguing to see what kind of damage he can do with a quarterback of his choosing. Nick Foles and Michael Vick were just stopgaps. Mariota could be the missing piece that the Eagles have been looking for since Kelly took the job two years ago. His skill set works in lockstep with Kelly’s system.

Mariota is extremely agile for a man his size, which makes him dangerous in the open field. He is also is a very precise passer. This past season alone he threw for 4,454 yards with 42 touchdowns and a ridiculous four interceptions. He also led Oregon to a Pac-12 championship and a Rose Bowl victory over the aforementioned Jameis Winston and his Florida State Seminoles.

The potential is certainly there for Mariota. His skills are well documented. A quarterback with a quick release and an accurate arm who isn’t prone to turnovers. What team wouldn’t sign up for that? If the NFL has taught us anything this past decade, it’s that you simply cannot win a championship without an elite signal caller.

If Chip Kelly were to get his hands on Mariota, there’s a myriad of things he would be able to do with his offense. Imagine a read option with the likes of Mariota and LeSean McCoy running it? Assuming the team brings back wide receiver Jeremy Maclin, think of all the speed that could potentially be on the field at one time. Mariota in the shotgun with Darren Sproles to his left, McCoy to his right and Maclin and Jordan Matthews spread out wide. Good luck stopping that, NFL defenses.

Everyone says Mariota resembles Colin Kaepernick, as far as an NFL comparison. While that certainly makes sense, I view Mariota more as a Cam Newton type. Both Newton and Kaepernick are extremely athletic with huge arms, but Newton is the better pure passer of the two. I believe Mariota’s passing skills are more refined than Kaepernick’s were when he was in college. But if he ends up to be like either one of these two quarterbacks, you will certainly take it.

Having said all of that, there is one big caveat to all of this. The Eagles don’t pick until 20th in the draft. There is no conceivable way that Mariota would fall that far. So they would have to make some sort of trade.

In order for the Eagles to entice anyone in the top five, they would probably have to offer a package including current quarterback Nick Foles, along with their first round pick and at least another top-round pick. If word were to ever come out that Mariota is in fact going in the top five—possibly to Tampa Bay at number one—then the haul would be even larger, likely similar to the package the Rams got for Robert Griffin III.

If Mariota does fall out of the top five, this is definitely a trade Eagles’ brass should look to make. Quarterbacks are more vital now to a team’s success than ever before. And with the roster that Philadelphia currently possesses, this could be the move that puts them over the top and helps them capture that elusive first Super Bowl championship in franchise history.