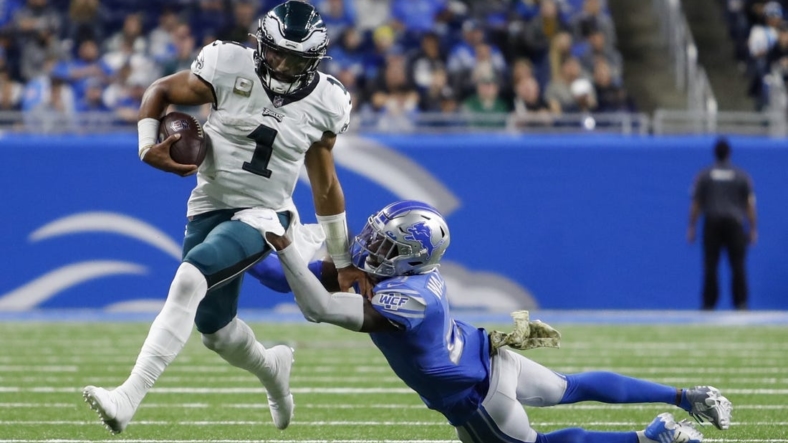 Jalen Hurts and Jared Goff begin pivotal seasons in their careers in Detroit on Sunday.

The quarterbacks for the Philadelphia Eagles and Detroit Lions, respectively, are under pressure to be more productive heading into the 2022 season opener.

The Eagles finished last season at 9-8 and lost 31-15 in the NFC wild-card round at Tampa Bay.

Hurts accounted for 26 touchdowns (16 passing, 10 rushing) in 15 starts in his second NFL season and will look to take the next step on a team with high aspirations.

“What we’ve seen in practice over and over and over again is him being able to get through reads quicker and being more accurate with his throws,” head coach Nick Sirianni said. “Just his progression as a player. Guys that are competitive, guys that are tough, and guys that love football have the ability to reach their ceiling and I see him continuing to grow.”

Hurts, a second-round pick in 2020, is still on his four-year rookie contract worth just $6 million — a bargain for a legitimate NFL starting quarterback. He could be in for a massive payday with a productive season.

Top running back Miles Sanders will try to bounce back from a season in which he failed to score in 12 games. Sanders has been nagged by a hamstring injury but practiced in full on Wednesday.

“It is exciting moving forward,” Hurts said of the stability. “As an offense, we’ve built a lot of chemistry. We’ve come together, we’ve hit a good little groove and we just want to carry it into the season.”

The Eagles notched their most lopsided victory of last season in Detroit with a 44-6 romp on Halloween, a loss Lions head coach Dan Campbell termed as “embarrassing.”

“They’ve got a solid (offensive) line,” Campbell said. “I don’t know about Miles, but I know if he’s ready to go, he’s a threat. And this quarterback is certainly a threat. If you allow him to get comfortable into what they do offensively, then it’s an issue. A then you add on top of that the perimeter with their two receivers and Goedert in the middle, they pose a threat.

“They’ve got plenty of weapons.”

Goff threw for 19 touchdowns in 14 games during his first season with the Lions after getting traded by the Los Angeles Rams. The Lions are coming off a 3-13-1 season, though they did win three of their final six games.

If they don’t show major improvement this season, Goff could be looking for another team. The Lions can cut him next March and only take a $10 million hit in dead cap money.

Goff’s concern this week is giving the Eagles some payback after last season’s debacle.

“You remember it,” Goff said in a radio interview. “We have different teams this year, but certainly we remember they came to our place and laid it on us last year and certainly we owe them one.”

Goff has some quality pieces around him.

The offensive line is considered one of the league’s best. Tight end T.J. Hockenson caught 61 passes in 12 games last season. D’Andre Swift accumulated over 1,000 yards from scrimmage before an injury cut his season short, and Amon-Ra St. Brown emerged as the top wide receiver as a rookie with 90 receptions.

Defensively, the No. 2 overall draft pick this April, Michigan’s Aidan Hutchinson, will make his much-anticipated debut.

The Lions have been in the spotlight on the TV series “Hard Knocks.” They’d like to be known as a team on the rise.

“I’m just most excited now that now we’re in the arena,” Campbell said. “There’s no more standing outside waiting for the gates to open.”