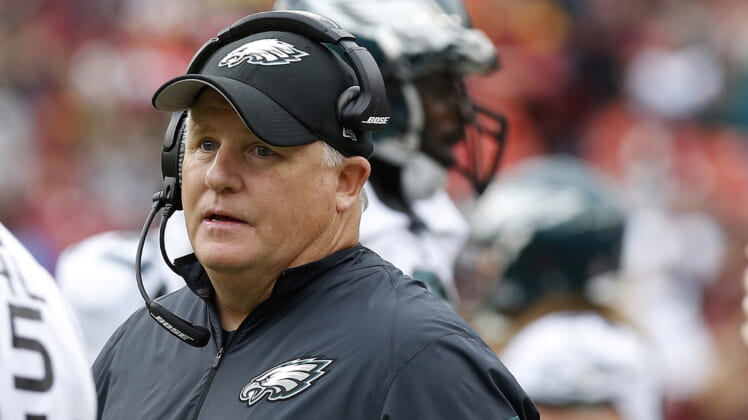 Chip Kelly came under fire following his release from the Philadelphia Eagles for a multitude of reasons, both valid and not.

From his puzzling personnel decisions to a regression in on-field product, Kelly was not the coach many envisioned when he was hired.

Now that he has been fired from his position as head coach of the San Francisco 49ers, detractors have come out of the woodwork to blast the former coach.

The most thinly-veiled of the shots being taken at Kelly have come from current Eagles GM Howie Roseman, who has had the dubious task of cleaning up the mess left behind in Philadelphia.

During his press briefing on Wednesday morning at the NovaCare Complex, Roseman had some choice words. He first mentioned the Eagles’ lack of firepower, bringing up the departures of DeSean Jackson, LeSean McCoy and Jeremy Maclin. Those were all decisions made by Kelly himself. It came without prompting and it was an obvious shot at Kelly.

When asked about how difficult it’s been for him to undo some of Kelly’s ill-advised moves, here’s how Roseman responded.

“You know, I think you’re just dealing with the reality of the situation. I could say sitting up here last year, it was challenging,” Roseman said, via CSN Philly.  “It was a challenging situation and it starts with the quarterback position. We didn’t have a starting quarterback under contract. (Sam Bradford) was a free agent. We were picking 13th with no two (second-round pick).

“And we sat down and we said if we can come out of this offseason, and sit here next season at this time and feel like we had a permanent answer at that position, we’re going in the right direction.”

Kelly infamously traded Nick Foles and a second-round pick to the Rams for Sam Bradford, whom Roseman traded to Minnesota for a first and fourth this past offseason.

Roseman has done an admirable cleaning up the mess left behind by Kelly, but the rebuild still has a ways to go.