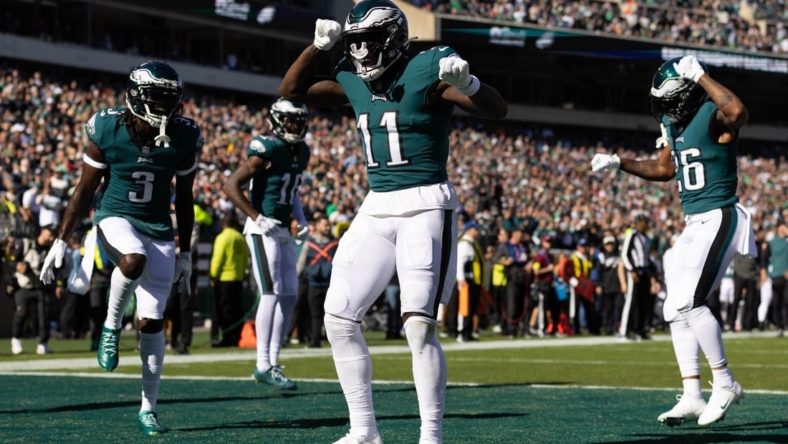 The Eagles (7-0) tied the 2004 squad that won its first seven contests en route to a Super Bowl appearance, while the cross-state rival Steelers (2-6) are off to their worst start since 2013.

Looking sharp after a bye week, Hurts completed 19 of 28 passes for 285 yards and a career-high four touchdowns — after throwing six in the first six games combined. Brown had six catches for a career-high 156 yards.

Steelers rookie Kenny Pickett was 25 of 38 for 191 yards with an interception and a fumble. He was sacked six times.

Hurts capped Philadelphia’s first possession of the game with a 39-yard strike to Brown in the end zone between two Pittsburgh defenders.

An Eagles penalty on fourth-and-goal and some trickery helped the Steelers knot the game at 7-7 on wide receiver Chase Claypool’s 1-yard TD toss to Derek Watt with 1:57 left in the first quarter.

Pittsburgh had lined up for a short field-goal try by newly signed Nick Sciba, but Philadelphia’s Brandon Graham was flagged for delay of game. The half-the-distance penalty moved the Steelers close enough to bring their offense back on the field.

Brown’s second score came on a perfectly placed 27-yard pass from Hurts with 12:48 left in the second quarter.

Sciba, signed Saturday to replace the injured Chris Boswell (groin), made his first NFL field goal from 38 yards to trim the deficit at halftime to 21-10.

Hurts opened the second half with his fourth touchdown pass, a 34-yard connection with a wide-open Zach Pascal for a 28-10 lead.

But two plays after a fumble by Pickett, forced by Javon Hargrave and recovered by Avonte Maddox, Miles Sanders capped the scoring with an 11-yard run.