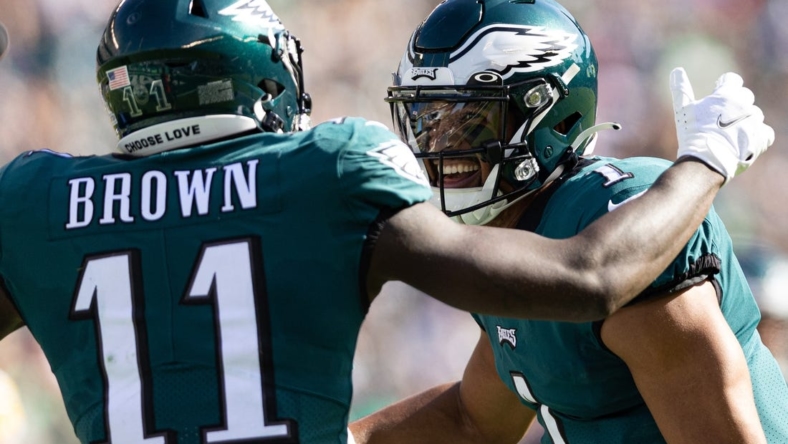 Philadelphia Eagles quarterback Jalen Hurts returns to his hometown on Thursday night as one of the frontrunners for NFL Most Valuable Player honors.

He also returns as a near two-touchdown favorite, but that hasn’t dissuaded the public from backing the Eagles (7-0) heavily against the Houston Texans (1-5-1). Philadelphia is a consensus 13.5-point favorite but has drawn 75 percent of the spread-line bets and 72 percent of the handle at BetMGM, 76 and 82 percent of the action at BetRivers and 74 and 57 percent at DraftKings.

The Eagles have covered 11 consecutive times as favorites at BetRivers and are 4-1 in their past five games as double-digit favorites.

One bettor from West Virginia is so confident in Philadelphia that he placed a $185,000 wager on the Eagles’ -750 moneyline.

“Going back to Houston, it should be fun,” Hurts said. “It’s always been a dream of mine to play at NRG-Reliant Stadium and I’ve spent a lot of time in that city — my childhood, growing up in Houston, going to watch the Texans play, being in the Texans’ facility as a kid.

“Going to watch high school playoff games in that stadium and not ever having the opportunity to play in it. I will have an opportunity this week and I’m looking forward to playing. It should be fun.”

PROP PICKS
Over 45.5 Total Points (-112 at BetRivers): Philadelphia has hit the Over in all but one of its past seven games against AFC opponents. The public is backing the Over with nearly two-thirds of both total tickets and money at the sportsbook.

Miles Sanders Anytime TD (+150 at BetMGM): If the Eagles are up big they figure to turn to a heavy dose of the ground game early. Sanders has five touchdowns through seven games while the Texans enter with the league’s worst run defense allowing an average of 186.0 yards per game on the ground.

Texans WR Chris Moore Over 30.5 Receiving Yards (-115 at DraftKings): One of the most popular player props at sportsbooks is the Under on Davis Mills’ passing yards because he’ll be minus Brandin Cooks and Nico Collins against one of the league’s top defenses. But Mills has to throw to someone and Moore steps in as his No. 1 wideout, having caught multiple passes if four of his five games this season and a total of 10 receptions for 128 yards and a score.

Texans: Collins (groin) is out while Cooks is not expected to play, reportedly because he did not get moved before the trade deadline. Defensive tackle Maliek Collins (chest), linebacker Neville Hewitt (hamstring), safety Grayland Arnold (quad) and guard Justin McCray (concussion) are also out. Linebacker Christian Harris (thigh) and defensive back Desmond King (knee) are questionable.

PREDICTION
Nothing is for certain for teams traveling on a short week but don’t expect the Eagles to let up until this game is safely in hand. Hurts is squarely in the MVP race, entering the game seventh in completion percentage (67.0 percent) and tied for fourth in rushing touchdowns (six). –Eagles 34, Texans 20