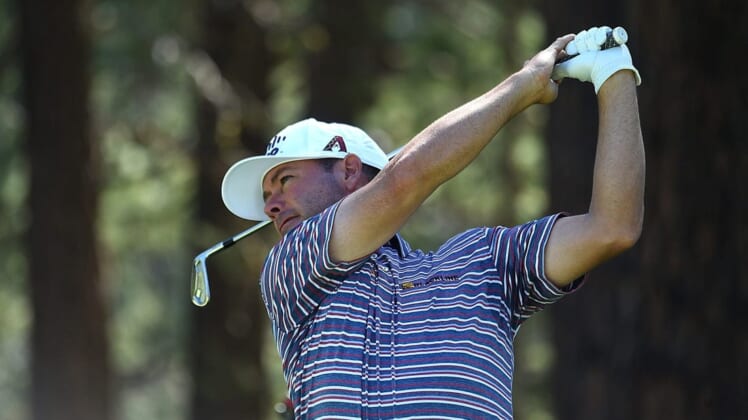 Chez Reavie chipped in for an eagle on Friday and emerged with the three-point lead at the midpoint of the Barracuda Championship in Truckee, Calif.

Reavie produced a plus-19 score for the day at the Tahoe Mountain Club’s Old Greenwood Course using the event’s Modified Sableford scoring system. He sits at plus-28 through two rounds.

First-round co-leader Mark Hubbard, who finished at plus-12 on Friday, and Sweden’s Henrik Norlander, who had a plus-14, are tied for second at plus-25.

Kevin Tway (plus-15 on Friday) holds fourth place at plus-21. Maverick McNealy (plus-8) and Martin Trainer (plus-11) are tied for fifth at plus-19.

Scotland’s Martin Laird (plus-8) sits in seventh place at plus-18.

The other first-round co-leader, Charley Hoffman, was just plus-2 on the day and slipped to a tie for 18th at plus-15.

Reavie had the best round of the tournament with the eagle, seven birdies and no bogeys. He was just off the green behind a bunker at the par-5 sixth hole when his third shot landed on the green and rolled into the hole.

Reavie, 40, has two career PGA Tour victories, the latest one coming in the 2019 Travelers Championship.

Hubbard played the back nine first and was just plus-2 at the turn. He added five birdies and no bogeys on the front nine.

Norlander recorded seven birdies in a bogey-free round.