Dynamo rally past Earthquakes in second half 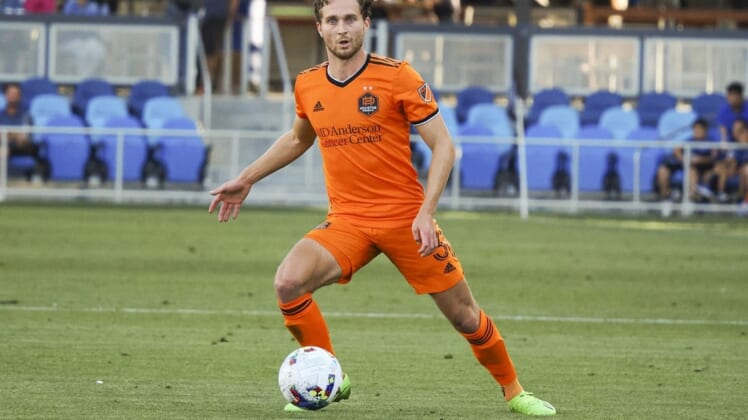 Sebastian Ferreira and Thorleifur Ulfarsson each scored goals during a five-minute stretch of the second half as the Houston Dynamo rallied for a 2-1 victory over the host San Jose Earthquakes on Sunday night.

Steve Clark had four saves for Houston (7-10-4, 25 points), which halted a four-match winless stretch (0-3-1). Defender Tim Parker made a monstrous stop to thwart a San Jose opportunity in the 74th minute.

San Jose held a 16-13 edge in shots and put six on target to Houston’s four.

The Dynamo improved to 3-7 on the road.

Houston knotted the score at 1 in the 71st minute after the Earthquakes gave the ball away in their own end.

Fafa Picault fed the ball to Ferreira, who easily sent it past Marcinkowski for his seventh goal of the season.

Five minutes later, Houston moved ahead after San Jose again was shaky in its own end. Darwin Quintero delivered a pass to Ulfarsson, who sent a left-footed shot into the left corner for his fourth goal of the campaign.

In the 74th minute, while the game was still tied, San Jose’s Jeremy Ebobisse had a wide-open net to shoot at with Clark out of position to the right. But Parker came sprinting toward the net and made a sliding leg save at the goal line to stymie Ebobisse.

San Jose struck in the 53rd minute for a 1-0 lead on a sequence that began with a corner kick.

Cristian Espinoza sent the kick into the mass of people in front of the net and Tommy Thompson knocked a header off the crossbar. The ball bounced toward Yueill, who sent a right-footed shot through the legs of Houston’s Teenage Hadebe and past Clark for his fourth goal of the season.

San Jose had the only two shots on the goal in the first half.

Espinoza delivered a left-footed boot in the 13th minute and Clark made the save.

Clark came up big again in the 41st minute when Paul Marie unleashed a right-footed blast from outside the box. Clark made the save with his right hand to keep the game scoreless.