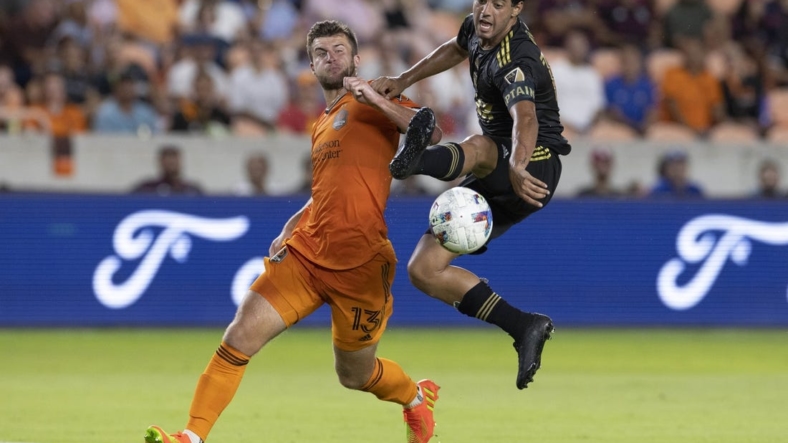 Sebastian Ferreira and Griffin Dorsey scored for Houston (8-15-5, 29 points). It was the Dynamo’s first win in more than a month, with their last win coming July 17. In between were five losses and one draw.

LAFC (18-7-3, 57 points) fell into a tie with the Philadelphia Union, who won their game Wednesday, for most points in the league, but they have lost three straight matches. In each of those losses, none of LAFC’s high-priced superstars — such as Carlos Vela or Gareth Bale — have found the back of the net.

Cristian Arango scored for LAFC in the 19th minute on Wednesday, tying the match at 1-1. Ferreira had scored on a penalty kick for Houston in the 13th minute. Arango used his head to guide in a cross from Vela for his 14th goal of the season.

But it was the only time that LAFC’s high-powered offense beat veteran goalkeeper Steve Clark. The 36-year-old had six saves, tying his season-high. LAFC got off 19 shots and put eight on-frame.

While Clark and the back line kept LAFC at bay, the Dynamo offense created the decisive goal in the 75th minute. After settling a ball from Adalberto Carrasquilla on the right wing, Dorsey dashed between two defenders and made his way into the box, then unleashed a left-footed shot that beat a sliding third defender and LAFC goalkeeper Maxime Crepeau. It was Dorsey’s first MLS goal of the season.

LAFC’s latest acquisition, Denis Bouanga, made his MLS debut in the 72nd minute, coming on for Arango.

Houston defender Darwin Ceren was sent off with his second yellow card of the night in the 97th minute.