Dynamo in search of first win ever in Seattle 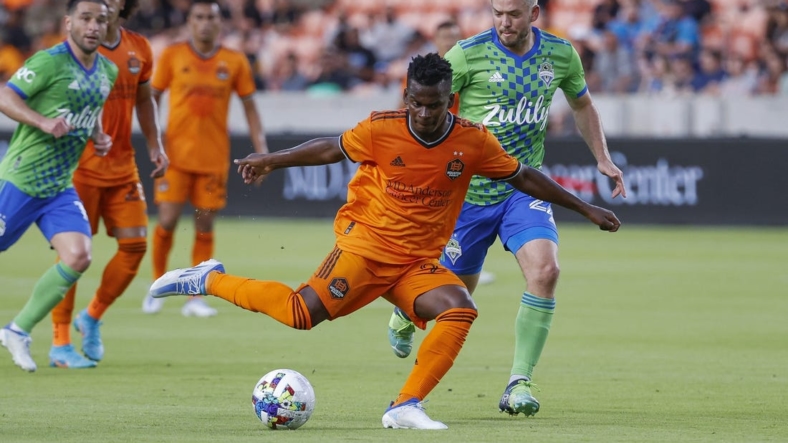 The Houston Dynamo have never won in Seattle, going 0-10-3.

But they’ll take some momentum into Sunday night’s match against the host Sounders.

The Dynamo (8-15-5, 29 points), who are in 12th place in the 14-team Western Conference, snapped a six-match winless streak with a stunning 2-1 victory against league-leading Los Angeles FC on Wednesday. Griffin Dorsey netted the winner in the 75th minute and teammate Sebastian Ferreira scored from the penalty spot early in the first half, his team-leading 10th goal of the season.

Midfielder Coco Carrasquilla, defender Tim Parker, goalkeeper Steve Clark and coach Paulo Nagamura all were named to the MLS Team of the Week for their efforts against LAFC.

“We knew the quality LAFC was going to bring to our city. We managed the game really well,” Nagamura said. “I think the players and team were really, really disciplined in the way that we want to approach the game and it’s a well-deserved win for everyone.”

The Sounders (10-15-3, 33 points), meanwhile, blew a two-goal lead in a 3-2 defeat Wednesday at Orlando City SC. It was the second time that’s happened to the Sounders this season, after being 127-0-1 in those situations entering the campaign.

Seattle entered the weekend in 10th place in the West, six points behind rival Portland for the conference’s seventh and final playoff berth.

The Sounders haven’t missed the playoffs since joining MLS in 2009.

“We’re so many points behind the last playoff spot,” said midfielder Albert Rusnak, who scored against Orlando. “We’ve been saying now for the past three months that there’s so many games that we’re going to catch up, we’re going to catch up and I don’t even know what the word is but it’s frustrating to keep losing and keep conceding these goals. …

“We all have to look in the mirror and we probably should’ve a long time ago. It’s not an easy situation for us players.”

Seattle won the previous meeting between the teams this season, 1-0 at Houston on May 18 on a goal by Raul Ruidiaz.