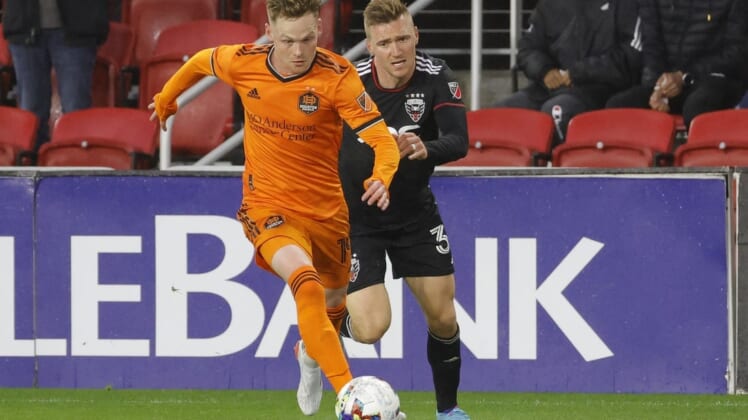 The Houston Dynamo and host Orlando City SC hope to build some momentum coming out of the international break when they clash Saturday night.

Orlando City (6-5-4, 22 points) got back into the swing Wednesday night, earning a 1-1 draw at New England in their first game since May 28.

“The effort after 16 days without playing was much, much better and the rhythm was better than I thought and we’ll be ready for the next one,” Orlando City coach Oscar Pareja said.

Since jumping out to a strong 3-1-3 start in MLS action this season, the Dynamo have found themselves flailing and hope the long break and friendly against San Luis can send them in the right direction. They are 2-5-0 in their past seven MLS games, slipping to eighth place in the Western Conference.

“It’s great to test things out with our players,” coach Paolo Nagamura said, noting that the Dynamo have been experimenting in some ways, as evidenced in the win over San Luis.

“We wanted to show them that they came into our house and we really wanted to impose our game and I feel like we did that very well,” Dynamo defender Adam Lundqvist said.

The outcome might have been a good way for the Dynamo to gain some traction.

“It just sets our mindset to what we’re trying to accomplish for the season,” said Tyler Pasher, who scored the only goal against San Luis in the 50th minute.

Orlando City will be playing three of its next five MLS games at home, in addition to the June 29 U.S. Open Cup quarterfinal against Nashville. There’s a sense that improvement is in the works.

Orlando City’s production has been widely distributed, with 10 players scoring the club’s 18 MLS goals this season. When Robin Jansson scored at New England, he became the fifth defender with a goal this season. Defenders have scored seven of the team’s goals, while Joao Moutinho and Ruan have each scored twice.

Since last playing an MLS game, the Dynamo announced that veteran Mexico national team midfielder Hector Herrera will be eligible to play for the club beginning July 9.