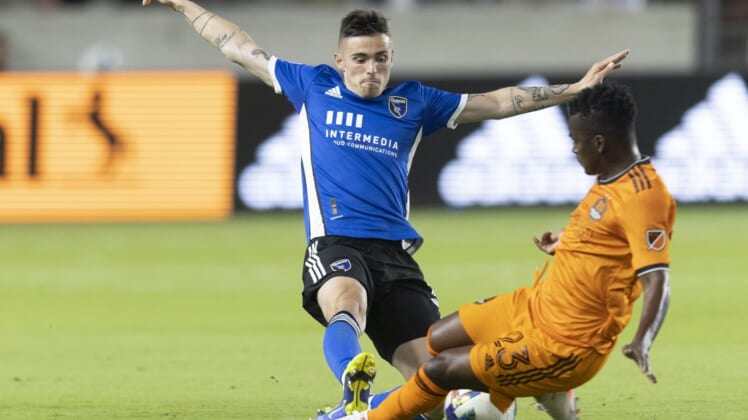 Sebastian Ferreira scored his first two MLS goals and the Houston Dynamo continued their home domination of the San Jose Earthquakes with a 4-3 victory Saturday.

The Dynamo have earned points in four-consecutive games after they were shut out in the first two games of the season.

Jeremy Ebobisse scored a pair of goals in a three-minute stretch of the first half for the Earthquakes (0-4-2), while JT Marcinkowski made three saves. San Jose lost its sixth consecutive game at Houston.

Ferreira’s opening goal came just eight minutes into the game on a right-footed shot off a corner kick from Adam Lundqvist.

The Earthquakes erupted for the lead, getting the tying goal from Ebobisse in the 25th minute off a tight pass inside the penalty area from Cade Cowell. Ebobisse scored with his left foot.

In the 28th minute, Ebobisee was at it again, heading home a long centering pass from Jan Gregus. It was Ebobisee’s third goal of the season, all in the past two games.

The Dynamo got even at 2-all just before halftime when Quintero scored off a long rebound of a Marcinkowski save for his fourth of the season.

The Dynamo took the lead for good 3-2 in the 57th minute when Hadebe pounced on a loose ball in front after a Houston corner kick. Ferreira, who joined the club in January after a transfer from Club Libertad in Paraguay, scored his second goal in the 68th minute.