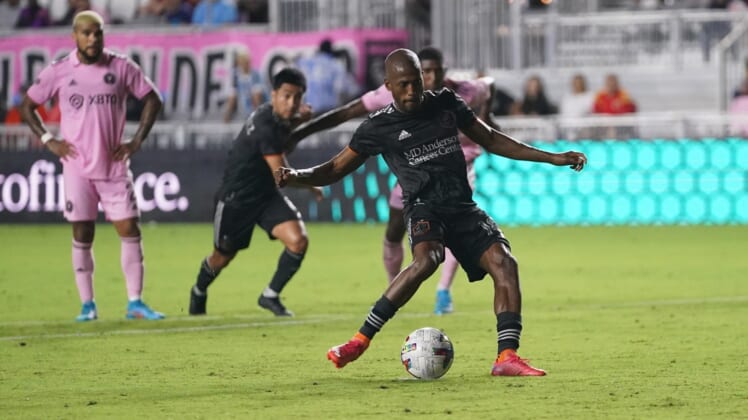 With a slow start behind them, the Houston Dynamo will play host to the San Jose Earthquakes on Saturday after earning a point in three consecutive games, while winning two of them.

The Dynamo (2-1-2, eight points) enter off a 3-1 road victory over Inter Miami CF last weekend, getting a pair of goals from Fafa Picault and a 49th-minute goal from Darwin Quintero that got Houston started toward a huge second half.

The eruption on offense was a welcome sight after the team failed to score in the first two games of the season and had just three total goals in four games before its visit to Miami.

“The guys came in with the right mentality and the right attitude and that showed up on the scoreboard,” Dynamo head coach Paulo Nagamura said. “The guys played the game we planned. The guys had an unbelievable performance and it’s great to (get) that first road win out of the way.”

Quintero has a team-leading three goals and four shots on goal.

The Earthquakes hope to ride the momentum of a second-half comeback last weekend that delivered a point with a 2-2 tie against Austin FC. Jeremy Ebobisse and Cade Cowell scored goals two minutes apart, with Ebobisse’s first of the rush not coming until the 70th minute on a penalty kick.

San Jose (0-3-2, 2 points) still is looking for its first victory of the season but appears to be on the right track after not scoring in either of the previous two games before Austin FC came to the Bay Area. All six San Jose goals this season have come off set pieces.

“We score from set pieces because we train them,” defender Francisco Calvo said. “We train them a lot, we take a lot of time on that. I’m not saying that we don’t take time on regular play, but it’s part of the game.

“Everybody is going to get confidence game by game and we are going to try to score more goals during the game and try to put this team where it needs to be.”

A breakthrough into the win column at Houston will come with an additional challenge. The Earthquakes have lost five consecutive games on the road against the Dynamo.

Houston will be chasing consecutive victories for the first time since September 2020.