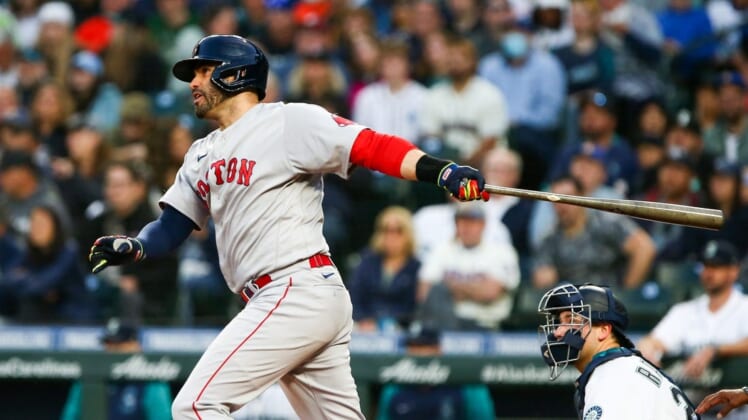 Dylan Moore lined a run-scoring single to left-center field with two outs in the bottom of the ninth inning to give the Seattle Mariners a 7-6 victory against the visiting Boston Red Sox on Saturday night.

The Mariners scored twice in the ninth to beat Boston for the first time in six tries this season.

J.P. Crawford drew a one-out walk off Hansel Robles (1-2) and Eugenio Suarez lined a single to left. With two outs, Abraham Toro hit a flare into shallow right-center to tie the score.

Paul Sewald (3-1) got the victory despite allowing a two-out homer to Bobby Dalbec in the top of the inning that gave Boston a 6-5 lead. Dalbec, a Seattle native who hit a tiebreaking homer in Friday’s 4-3 victory, hit a shot to left that glanced off the glove of a leaping Jesse Winker at the wall and fell just over.

Rafael Devers and J.D. Martinez hit two-run homers, but the Red Sox lost for just the second time in their past 10 games.

Rookie Julio Rodriguez hit a two-run shot for the Mariners.

The Red Sox scored three times in the first inning. Leadoff hitter Trevor Story reached on an error by shortstop Crawford and Devers followed with a homer to deep right field. With one out, Xander Bogaerts lined a single to center, stole second, advanced to third on a groundout and scored on Christian Vazquez’s grounder into right field.

The Mariners scored twice in the bottom of the inning. With one out, Ty France reached base when right fielder Franchy Cordero dropped a flyball. Rodriguez and Crawford both singled to load the bases and France scored on a wild pitch. Suarez walked to re-load the bases before Adam Frazier lined a single off the glove of second baseman Story to make it 3-2.

The Mariners took the lead in the second as Winker singled with one out and, an out later, Rodriguez homered to left-center to make it 4-3.

The score stayed that way until the fifth. Devers drew a two-out walk and Martinez went deep to left, his second consecutive game with a homer.

The Mariners tied it in the seventh as Crawford led off with a single, moved to second on a two-out wild pitch and scored as Toro doubled high off the wall in left.