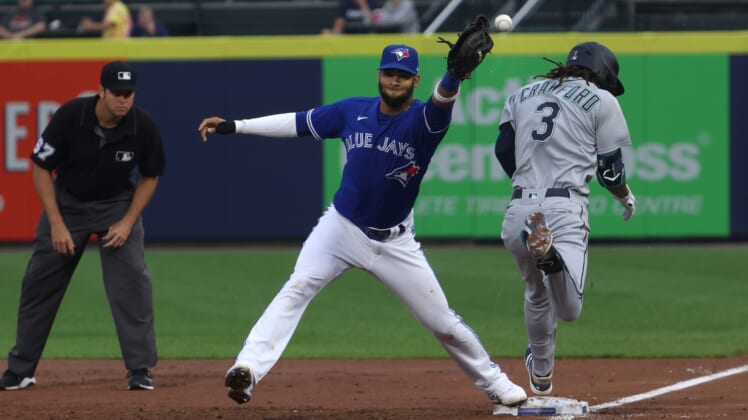 Dylan Moore hit a three-run home run in the top of the 10th inning and the visiting Seattle Mariners defeated the Toronto Blue Jays 9-7 on Wednesday in Buffalo.

Kyle Seager and Mitch Haniger each hit two-run homers for the Mariners, who leveled the three-game series at one win apiece. The series concludes Thursday afternoon.

Toronto’s Lourdes Gurriel Jr. tied the Wednesday game 6-6 with an eighth-inning solo homer against Anthony Misiewicz. It was his ninth long ball of the year.

With Seattle’s Luis Torrens starting the 10th at second base, pinch hitter Shed Long Jr. hit a one-out single against Patrick Murphy (0-1). Moore followed with his seventh homer of the season, his third hit of the game.

Kendall Graveman (2-0), who pitched 1 2/3 scoreless innings, got the win. Drew Steckenrider allowed Cavan Biggio’s RBI double in the bottom of the 10th but still earned his second save.

Toronto’s Steven Matz, returning from the COVID-19 list to start for the first time since June 12, allowed four runs and five hits in 2 2/3 innings. He struck out three without issuing a walk.

The Blue Jays scored once in the second inning after loading the bases with no outs. George Springer and Randal Grichuk singled, Biggio walked and Gurriel hit a sacrifice fly.

The Blue Jays tied the game in the fourth on doubles by Riley Adams and Marcus Semien.

The Mariners regained the lead in the fifth. Crawford doubled and Haniger hit his 18th homer of the season.

JT Chargois allowed one run in the bottom of the fifth when Springer doubled, took third on Biggio’s single and scored on Gurriel’s single.