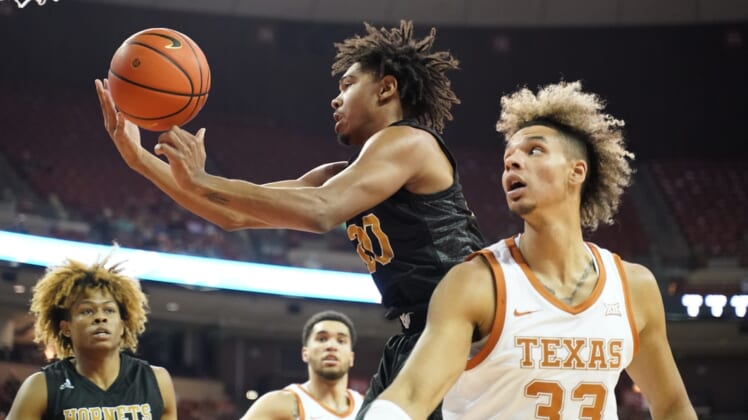 Dylan Disu scored 14 points and the Texas defense continued to impress as the No. 16 Longhorns pulled away in the second half for a 68-48 win over Alabama State on Wednesday afternoon in Austin, Texas.

It was the third straight win for the Longhorns (9-2), who were originally scheduled to play Rice on Wednesday before the game was canceled due to COVID-19 issues with the Owls.

Alabama State (2-10) was an available opponent after the Hornets’ game Tuesday at Memphis was also called off.

Texas, which forced 20 turnovers and limited the Hornets to 36.7 percent shooting, has held the opposition under 60 points in all nine of its wins.

Gerald Liddell, who played at Texas for three years before transferring to Alabama State prior to this season, led all scorers with 16 points while Juan Reyna added 10 for the Hornets.

Texas shrugged off a ragged start and was up by four points at halftime on the heels of a 7-0 spurt to end the first half.

Alabama State controlled the pace early and led 16-4 on Kenny Strawbridge’s 3-pointer at the 12:36 mark.

Texas rallied to tie the game at 25 on a jumper by Jase Febres with 2:55 left, and finally moved in front on a layup by Disu with 1:05 remaining in the half.

A pair of free throws by Jones advanced the Longhorns’ lead to 29-25 at the break as Alabama State was held scoreless over the final 3:23 of the first half.

Disu paced all scorers in the half with 10 points while Liddell and Young led the Hornets with seven points each.