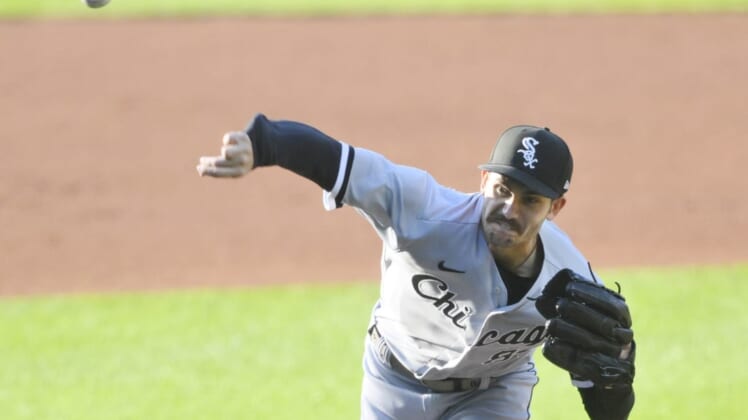 Dylan Cease threw 5 2/3 shutout innings to lead the visiting Chicago White Sox to a 7-0 win against the Cleveland Guardians and a split of a day-night doubleheader on Tuesday.

Cease (8-4) entered with the fourth-lowest ERA in the American League, 2.45, and lowered it to 2.30. He allowed five hits, struck out nine and walked three. Cease raised his strikeout total to a major-league-leading 142.

Luis Robert led the Chicago offense with three hits, including a three-run homer off the right field foul pole with two outs in the ninth. Jose Abreu and Josh Harrison also homered for the White Sox, who had dropped the previous two games in the four-game series that concludes Wednesday.

Cleveland rookie left-hander Konnor Pilkington (1-2) allowed four runs, three earned, and six hits in five innings. He struck out three and walked one for the Guardians, who won the opener of the doubleheader 4-1.

Abreu provided Cease an early cushion by clubbing a two-run homer in the first inning.

Tim Anderson walked to lead off the game and was erased at second base on a force out before Abreu hit a first-pitch changeup over the fence in right-center field for a 2-0 lead.

Harrison went deep with one out in the second inning to end an 0-for-13 stretch and increase the lead to 3-0.

The White Sox tacked on an unearned run in the third on a fielding error by third baseman Ernie Clement.

Cease avoided trouble until Jose Ramirez doubled to lead off the sixth inning. Cease got the next two outs but was removed after walking back-to-back batters to load the bases.

Reynaldo Lopez entered and struck out Luke Maile on three pitches to keep the Guardians scoreless.

Cleveland also stranded the bases loaded in the eighth. The first two batters reached base off Kendall Graveman, but he responded with back-to-back to strikeouts, then gave up a single to pinch hitter Amed Rosario before Clement lined out to left to end the inning.

Robert hit his opposite-field homer in the ninth to make it 7-0.