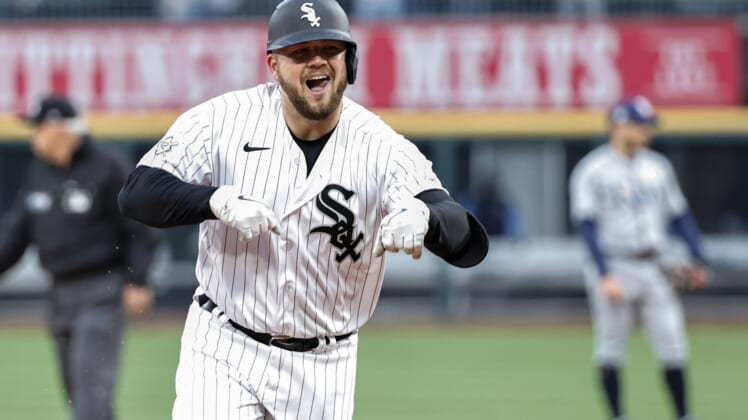 The White Sox got a strong outing from starter Dylan Cease and some power from an unexpected source in a 3-2 victory against the Tampa Bay Rays on a cold and wet Friday night in Chicago.

The Rays were forced to skip batting practice and it showed. That helped allow Cease, who is on his way to being the one constant on a banged-up Chicago pitching staff, to dominate early.

Cease pitched 5 2/3 innings with only one earned run allowed in his second consecutive good outing. He held the Rays to three hits while striking out eight and walking two. Cease’s ERA for the season now stands at 1.69.

Cease (2-0) outdueled Drew Rasmussen (0-1) in a game when the Rays weren’t able to get their bats going early on. Rasmussen went five innings, allowing three runs on five hits.

Two of those hits came from Chicago’s No. 9 batter, third baseman Jake Burger. After surrendering a run on a wild pitch in the bottom of the second inning, Rasmussen gave up a leadoff home run to Burger. The home run traveled 430 feet.

Burger also came up with a big hit in the fifth inning. After Leury Garcia got his first hit of the season (breaking an 0-for18 streak), Burger came up with an RBI single to right.

Cease left the game with the White Sox leading 3-0, but reliever Aaron Bummer let the Rays back into the sixth inning. Ji-Man Choi doubled to drive in Brandon Lowe. Yandy Diaz followed with a double to score Choi to make it 3-2.

Closer Liam Hendriks came on to pitch the ninth inning for Chicago shut down the Rays in order, earning his third save.