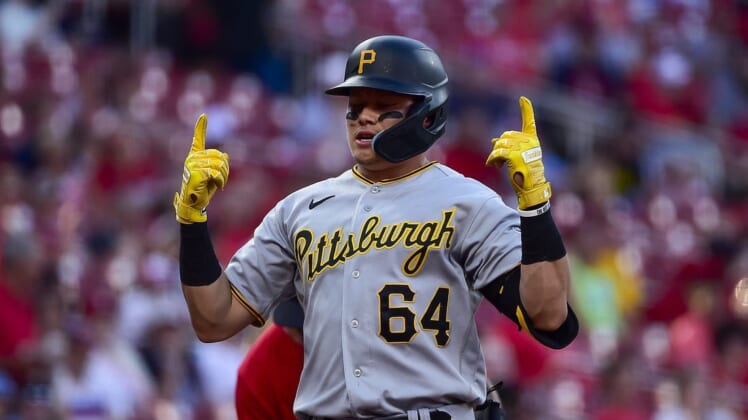 Dylan Carlson went 2-for-4 with a double, a three-run homer and two runs as the St. Louis Cardinals rallied from a 5-0 deficit to defeat the visiting Pittsburgh Pirates 7-5 Monday.

The Cardinals won for the sixth time in their last seven home games while the Pirates’ losing streak reached seven games.

Paul Goldschmidt hit the go-ahead homer while going 3-for-4 with a walk and two runs. Brendan Donovan went 3-for-4 with two doubles and two RBIs.

Michael Chavis hit a three-run homer for the Pirates and Diego Castillo hit a solo shot.

Giovanny Gallegos (2-2) earned the victory in relief and Ryan Helsley closed out the ninth to earn his fifth save.

Castillo hit his homer in the second inning to put the Pirates up 1-0.

They increased their lead to 5-0 in the fifth inning. Yu Chang led off with a single, moved to third on Bryan Reynolds’ single and scored on Ke’Bryan Hayes’ RBI single.

Then Chavis crushed his three-run homer.

The Cardinals responded by tying the game in the sixth inning. Goldschmidt hit a leadoff double and moved to third on Tyler O’Neill’s one-out single.

Goldschmidt put the Cardinals up 6-5 with his homer off Chris Stratton in the seventh inning.

The Cardinals tacked on a run in the eighth when Carlson hit a leadoff double and scored on Chang’s error covering first base on Andrew Knizner’s bunt.