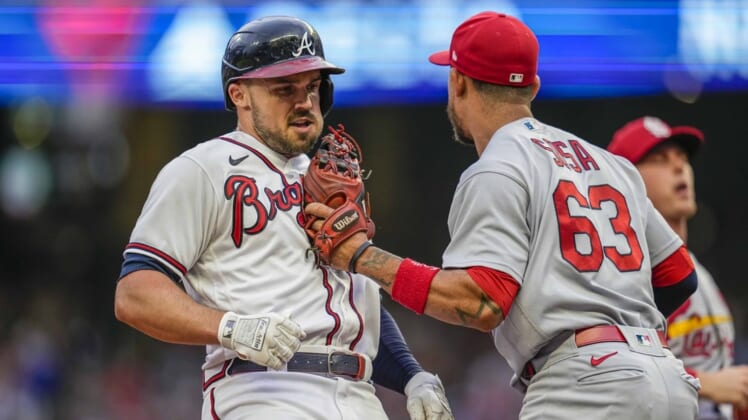 Dylan Carlson came off the bench to go 3-for-3 and drive in the go-ahead run in the 11th inning as the visiting St. Louis Cardinals earned a 3-2 win over the Atlanta Braves to end a four-game losing streak.

Carlson lined a single just out of the reach of second baseman Phil Gosselin to drive in Nolan Arenado and allow the Cardinals to salvage the finale of a four-game series.

Carlson may have saved the game in the ninth inning when he ran down a line drive from Michael Harris II that appeared headed to the wall in left-center. Pinch runner Gosselin, who was almost to third base when Carlson caught the ball, was easily doubled off at first to force extra innings.

The winning pitcher was Ryan Helsley (5-1), and Packy Naughton earned his first major league save after retiring all three batters in the bottom of the 11th. Tyler Matzek (0-2) took the loss.

Atlanta starter Spencer Strider threw six scoreless innings and has allowed only one run over his last 18 innings. The right-hander struck out a career-high 12 batters and got his first nine outs of the game via the strikeout, the first time a Braves pitcher has accomplished that feat since at least 1961.

St. Louis starter Matthew Liberatore bounced back from a rough outing to throw four scoreless innings in his first career appearance against Atlanta. The left-hander allowed three hits and three walks while striking out four.

The Cardinals scored a run in the seventh against reliever Will Smith when Albert Pujols, in his last regular-season appearance in Atlanta, hit a pinch-hit sacrifice fly to left field that scored Nolan Gorman, who was able to slide in ahead of the throw from Adam Duvall.

The Braves tied the game in the bottom of the seventh against Giovanny Gallegos. Harris led off the inning with a home run to center field, his sixth. It broke an 18-inning scoreless streak for the St. Louis bullpen.

The Cardinals scored in the 10th on a sacrifice fly by Juan Yepez. The Braves matched it on Matt Olson’s RBI single but stranded runners at first and third.