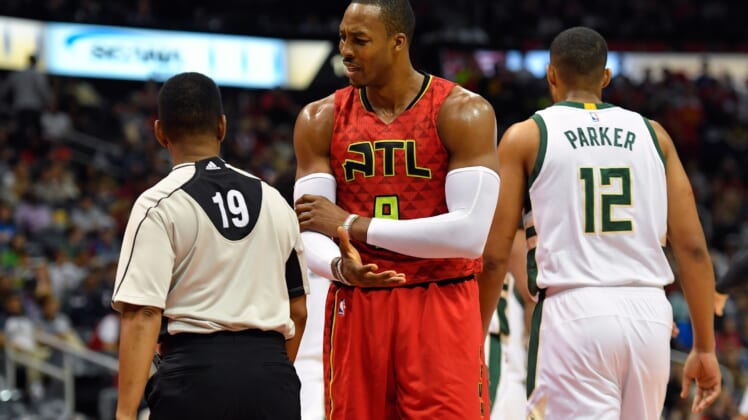 In order to extend his career, Atlanta Hawks big man Dwight Howard is working on his three-point shot. Seriously.

Speaking on “The Jump” with Rachel Nichols, Paul Pierce, and Scottie Pippen, Howard acknowledged that shooting threes will be a different look for him, but made it clear that he’s working on developing a perimeter game.

“So, I have this guy in Atlanta that I’ve been working with, and I’ve been working on my threes. Really trying to add some range to my game, which is gonna be weird for people to see, I guess. They’re used to seeing me in the paint, battling. But in order for me to play longer, I have to expand my game.”

The comments can be heard here.

It’s true that the increased use of small ball is rendering anyone who can’t at least be considered a threat from distance obsolete. Still, the thought of Howard pulling up and shooting a three will be hard to get used to.

In his career, Howard has attempted 56 three-pointers. Frankly, that number seems high. Aside from pulling down a defensive rebound at the end of a quarter and chucking a full court Hail Mary shot, it’s hard to think of any scenarios that would have had him shooting a three.

Even harder to believe is that five of those 56 three pointers went in. As a point of reference, Stephen Curry made six threes in Game 2 of the NBA Finals.

The fact that both sides of 5-for-56 seem high definitely show how much work Howard has to do. If he’s successful, it will defy the notion that you can’t teach an old dog new tricks.