The Pittsburgh Steelers appear intent on carrying three quarterbacks this season after their reported decision to retain Dwayne Haskins on their initial 53-man roster.

NFL Network’s Ian Rapoport reported on Haskins’ fate on Tuesday, as the Steelers are going to continue to see how the 2019 first-round pick develops behind Ben Roethlisberger and Mason Rudolph.

Given Haskins’ draft status and obvious talent level, Pittsburgh made a low-risk, high-reward move of signing the 24-year-old to a minimal one-year contract for 2021. However, it is a little disappointing that Haskins didn’t make enough strides to beat out Rudolph for the primary backup job.

Any chance of that happening ended when Haskins underwhelmed in the Steelers’ preseason finale. Head coach Mike Tomlin was critical of Haskins’ showing against the Carolina Panthers.

“I didn’t think it was enough varsity work from him,” Tomlin said, per ESPN.com’s Brooke Pryor. “It wasn’t the type of performance he wanted or we wanted. But such is life.”

Rudolph has been with the Steelers for several years, yet has a clear ceiling as a QB. Haskins’ upside obvious, but his maturity as a player and person continues to be a serious work in progress. 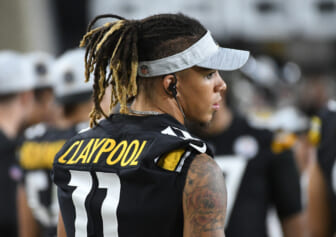 After getting cut during the 2020 campaign by the Washington Football Team due to poor performance and bad decisions away from the gridiron, Haskins was fortunate to get a second chance at all, much less with an organization as strong as the Steelers.

Haskins did show promise earlier in the preseason versus the Philadelphia Eagles, completing 16 of 22 passes for 161 yards and a touchdown. That likely went a long way in securing his roster spot.

It’s very possible Roethlisberger is entering his final season, and Pittsburgh has long avoided putting together a competent contingency plan for Big Ben. Haskins will hopefully rise to the occasion and compete for the starting job in 2022, provided Roethlisberger does, in fact, retire.

Are the Steelers going to the postseason in 2021? Find out in our latest NFL playoff predictions